What causes an atmospheric river?

Most days Californians enjoy mild weather.  It is what draws so many people to the State. But the State’s climate is punctuated by extremes which has led to the joke that California has its own four seasons; floods, fires, drought, and earthquakes. After years of enduring drought and fires, it might make you scratch your head to hear that suddenly the state is making headlines with floods.  This is part of the climate cycle and occurs when the area is inundated with Atmospheric Rivers.

WHAT IS AN ATMOSPHERIC RIVER?

If Atmospheric River is a new term to your weather vocabulary, you aren’t the only one.  Our understanding of Atmospheric Rivers has accelerated over the past two decades as research into this phenomenon has increased.  This term refers to the long, narrow bands of water vapor in the sky, similar to rivers on the land.  Unlike rivers, we can’t see water vapor with our eyes, so we rely on remote sensing from satellites. (see image below)  Microwave technology can detect this water vapor and create images that show where there are high concentrations of water vapor in the atmosphere.  These bands are usually long and thin, like a river.

Detecting these bands is crucial for California as the State is uniquely vulnerable to flooding from these Atmospheric Rivers due to its latitude and terrain.  Here is why. Each year, during the winter season the jet stream shifts southward as the northern hemisphere cools.  This brings storm systems from the polar regions down into the continental United States.  As these Low-pressure systems form into waves, jets of southerly winds develop.  If the storms are large enough and the jets are strong enough, these winds extend to the subtropics and pick up warm, moist air and draw this moisture air into the cyclone.  You may hear meteorologist call this “The Pineapple Express”.  Warm air can hold far more moisture than cooler air.  So the air ahead of the storm system becomes saturated with available water vapor.

The next step in the water cycle is getting that moisture from the sky to the ground.  For the Western United States, the typical pattern is that High pressure prevails over the Eastern Pacific. So most storms are forced up and over the ridge and toward Oregon and Washington where this moisture from these Atmospheric Rivers is wrung out of the sky as the air is forced up and over the Cascades. Consequently, Seattle and Portland are typically rainy and wet.  But each winter as the Polar Jet Stream shifts southward, the prevailing High breaks down periodically, and then storms dip further south toward California. Then the Sierra Mountains will wring out that moisture and deposit it in the mountains as snowpack.  This is essential for the State’s water storage. But this pattern can go in cycles with many years in a row seeing few storms and then drought as the snowpack reduces.

When the East Pacific High breaks down for an extended time period, large storms take a more southerly track, and that allows the southerly winds ahead of the storm to tap into the subtropical moisture. Atmospheric Rivers are then aimed at California.  This becomes like a firehose of concentrated water, which can be devastating after years of drought and the resulting fires have removed vegetation leaving slopes of exposed dirt that quickly soak up the rain creating mudslides. 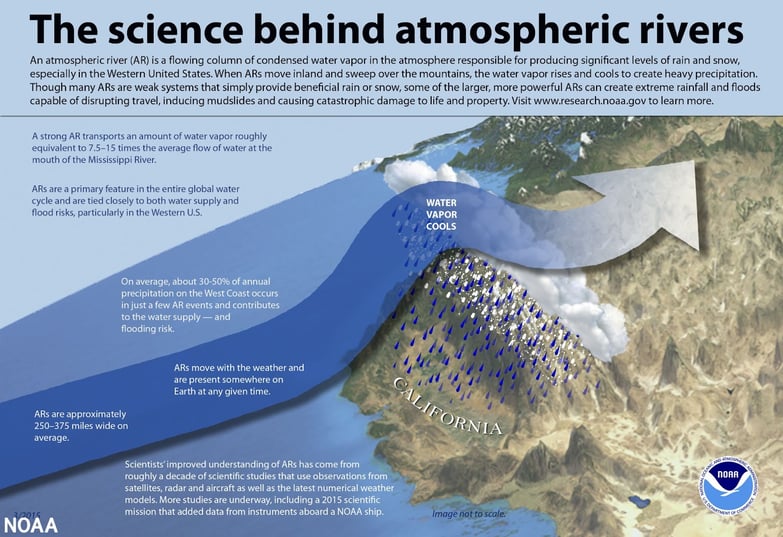 This cycle of drought followed by periods of Atmospheric Rivers is not new to California.  This is a hazard of the area's climate that can cost billions of dollars and lives.  Consequently, the National Ocean and Atmospheric Administration has focused on researching and forecasting these Atmospheric Rivers so the West Coast can mitigate against this hazard.  They have created models, similar to the Weatherflow’s Wf-Wrf that focus on forecasting when and where this moisture will fall.

You can learn more about this work and see the forecast at NOAA’s Physical Science Portal, Atmospheric Rivers.