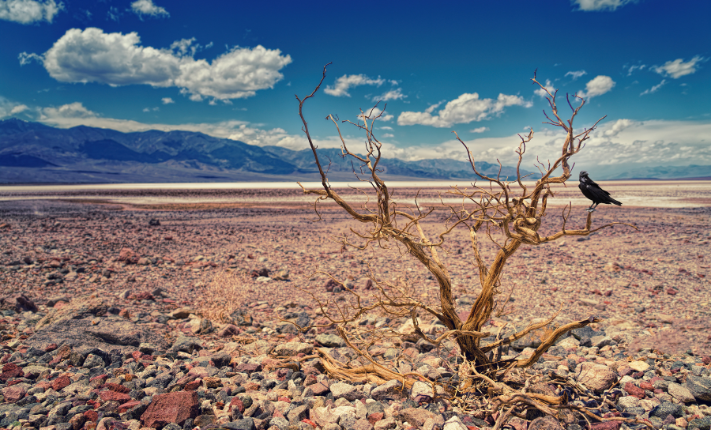 A drought is a prolonged period of time with little or no rainfall that leads to water shortage and is a type of extreme weather that can be detrimental to the environment in many ways. Lack of precipitation can be caused by a number of changing conditions, including climate change, changing ocean temperatures, jet stream and atmospheric fluctuation, and landscaping. The likelihood and severity of droughts have been increasing as the Earth's climate warms, and are predicted to continue.

WHAT HAPPENS DURING A DROUGHT?

Most parts of the world can dry out without enough regular rainfall, and when a dry spell is long enough, plants, animals, and other parts of an area's ecosystem can suffer as a result of the lack of water. A prolonged drought can have long-standing negative effects on a given region’s flora, fauna, and economy, even long after it has impacted an area. The hydrologic imbalances caused by droughts are especially threatening to communities that lack adequate food and water, as these communities are left the most vulnerable when crops or livestock die from the hot and dry conditions.

Unlike other types of extreme weather events, knowing exactly when a drought begins and ends can be tricky. Some regions will go unaware that they are experiencing a drought for several weeks, months, or even years.

WHAT ARE THE DIFFERENT TYPES OF DROUGHT?

There are several different types of drought that can occur depending on the reasons for the drought and how it is affecting the surrounding environment. You've got: 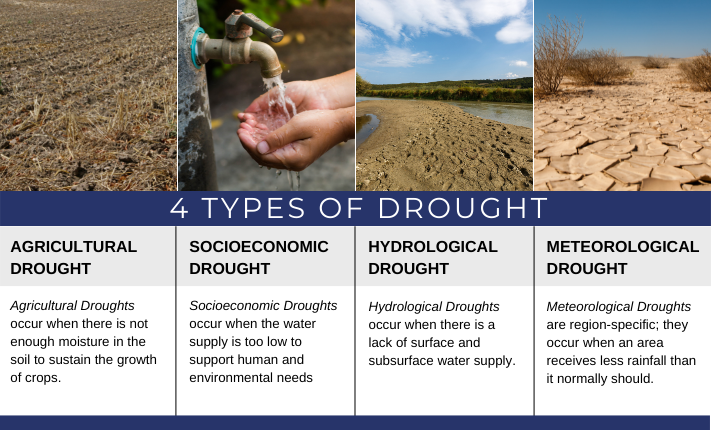 Like many extreme weather events, droughts can have harrowing consequences on the communities and surrounding environment they affect. The consequences of drought can be environmental, economic, or societal impacts on the affected and surrounding areas or any combination of the three. At the very least, some crops and animals will suffer or die. The more severe a drought, the more likely it is to impact human life directly. Droughts have the ability to dry out rivers, make important commodities scarce, and cause starvation and a lack of drinking water in local communities.

Some environmental consequences of severe drought could be:

Some economic consequences of severe drought could be:

Some societal consequences of severe drought could be:

How an area will feel the effects of drought will vary depending on the location, type of environment, and severity of the drought. Considering some of the consequences of extreme drought are important when making decisions about preparing and protecting your home and property in the potential case of a drought in your area.

EXTREME DROUGHTS IN THE UNITED STATES

There have been several severe droughts throughout the world since long before recorded history. In fact, it is hypothesized that early megadroughts are what prompted the spread of the first humans out of Africa. Throughout time droughts have brought down civilizations, and caused the spread of disease, famine, wildfires, and other natural and biological disasters across the globe. Many major droughts have hit the United States since before the colonization of North America, but some have stood out due to their extremely disastrous impacts. 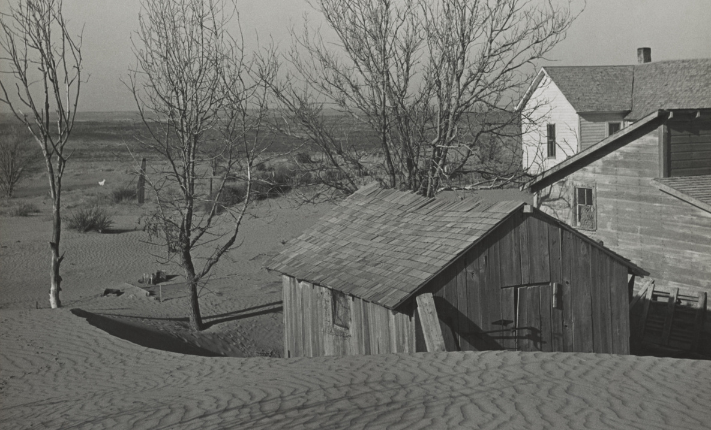 The Dust Bowl drought lasted from 1930 to 1939 and brought extreme dust storms and dry conditions to much of the Great Plains states.

HOW DOES CLIMATE CHANGE AFFECT DROUGHTS?

Emerging research shows that climate change is likely increasing the frequency and severity of droughts in the United States and beyond. Rising air temperatures hasten the evaporation process and allow for more water to be held in the atmosphere. Not only are higher temperatures going to increase the likelihood of drought, but they can also increase the overall intensity of a drought that could have otherwise been less severe. The Southwest United States is especially at risk, as annual precipitation has steadily decreased there over the last century, and this trend is expected to continue. You can view a current map of drought conditions in the United States here.

HOW TO PREPARE YOUR HOME FOR A DROUGHT

There are many ways that you can prepare your home and property for potential drought. From how you run your home to how you take care of your lawn and garden, energy efficiency and water conservation will be the most vital in staying safe during drought or dry conditions.

Conserve energy and water in your home by:

Learn more about how you can make your home more energy efficient with Tempest here. The Tempest Weather System has endless possibilities with our integrations and open API for you to turn your home into a smart home.

Conserve energy and water in your lawn and garden by:

Learn more about how you can make your lawn and garden more energy efficient with Tempest here.

While the worsening of drought in the United States and beyond seems inevitable, there are steps that can be taken to prepare for extreme weather event and to reduce their frequency and severity. By taking some of the steps above, your home and personal property will be better prepared in the case of a drought or prolonged period of extreme dryness or heat in your area. But there are also actions you can take at the local, state, and national level to help fight climate change and reduce the warming temperatures that fuel extreme droughts.