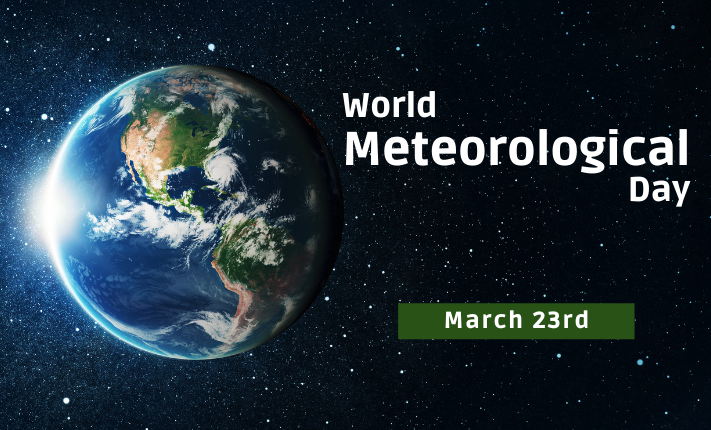 Celebrated each year on March 23rd, World Meteorological Day commemorates the establishment of the World Meteorological Organization on the same day in 1950.  To celebrate, we took a deep dive into the WMO and give you the run down on what they do, where they’re headed, and this years’ official theme.

WHAT IS WORLD METEOROLOGICAL DAY, AND HOW DID IT BEGIN?

The International Meteorological Organization would continue to operate until March 23rd, 1950, when it would then become the World Meteorological Organization, or WMO, as we know it now.  Today the WMO has 193 Member States and Territories and is dedicated to providing worldwide climate and weather information as well as early warnings of severe weather and other natural disasters.

WHAT DOES THE WORLD METEROLOGICAL ORGANIZATION DO?

The World Meteorological Organization commits itself to the collaboration of international efforts surrounding the nature of Earth’s atmosphere and its interaction with lands and oceans as well as the weather and climate those interactions produce.  They do their work through a multitude of national and multi-national projects for their members in order to achieve long-term goals set by the WMO Strategic Plan.  Goals are set from motives reflecting the mission and priorities of the WMO like advancing targeted research, enhancing observation and prediction systems, and closing the capacity gap on certain environmental services.

Each year the WMO also celebrates World Meteorological Day to highlight the contributions made by the organization. Since 1961 the organization has chosen a yearly theme for the celebration, and in the past has done themes surrounding planet observation, youth climate engagement, natural disaster prevention, and more.  This year, the theme is “The ocean, our climate, and weather” and focuses on the WMO’s efforts in connecting the ocean, climate, and weather within the earth system.

Last year at the Annual Meeting for the American Meteorological Society we caught up with Petteri Taalas, the Secretary-General of the World Meteorological Organization and got to learn more about the developing public-private partnership initiative in the organization; an integral part of meeting some of their 2020-2023 goals.

WHY IS THE PUBLIC-PRIVATE INITIATIVE IMPORTANT?

In our interview, Taalas explains that the WMO had undergone a forward-looking structure revision that was putting more emphasis on action.  One of those actions was establishing the WMO Public-Private Engagement Office in January 2020 to increase engagement between public, private, and academic sectors that operate within the global weather enterprise.  According to Taalas, the emerging strategy at the WMO was to build a more comprehensive community and approach to climate, weather, and water actions.  He goes on to say that working with private sectors will allow the WMO to provide more services to its members, and that pilot projects were already in place in areas with little data but a growing number of private weather monitoring programs making positive contributions to quality forecasts.  Read the rest of our interview with Petteri Tallas here.

There are many different ways you can celebrate World Meteorological Day, like tuning in to your local TV meteorologist to get your weather info for the day, learning more about the World Meteorological Organization, or even donating to a natural disaster relief fund.  We’d like to celebrate by recognizing the amazing meteorologists who are a part of our operational forecasting team. For over 20 years, WeatherFlow meteorologists have dedicated themselves to collecting and analyzing weather data that is reliable and accurate.  WeatherFlow data sets are also shared with the National Weather Service (NWS-NOAA), supporting their mission of predicting dangerous weather and warning the public of potential risks.