Weather enthusiasts around the world tracked the global pressure wave from the massive volcanic eruption in Tonga through WeatherFlow Tempest’s network of stations.

A look at three Tempest Weather Stations (Fiji, Hawaii, and California) reporting the pressure wave generated by the Tonga volcano.

WHAT IS BAROMETRIC PRESSURE?

Oftentimes, the Earth’s atmosphere is described as a vast ocean of air in which we all live. This analogy allows us to visualize the layers of atmosphere around and above us, which get increasingly less dense until the line between Earth’s atmosphere and space is blurred completely. It is the changing density of these molecules that contributes to the weight of the atmospheric pressure exerted on the Earth, and the reason why humans can't just scale large mountains without acclimatizing to the differing pressure. To explain the pressure wave, one scientist described the eruption as having given, "a little shove or a jiggle to the whole atmosphere.”

A VOLCANIC ERUPTION OF EPIC PROPORTIONS

When a volcanic eruption occurs at the magnitude of the Tonga eruption, it is not uncommon to see a spike in air pressure, because the eruption creates a shock wave through the atmosphere. Beyond the ensuing pressure wave, volcanic eruptions can greatly impact the weather and climate, since they propel gas, ash, and aerosol particles into the stratosphere, blocking solar radiation. This can result in cooler temperatures for months or even years, depending on the scale of the eruption. In the case of the Tonga eruption, early predictions claim that emissions from the eruption were small enough that experts do not expect there to be a cooling effect.

A volcanic eruption is measured using a classification system called the Volcanic Explosivity Index, or VEI. Developed in the 1980s, it is similar in nature to the magnitude scale for earthquakes. The scale goes from 1 to 8, and each succeeding VEI is 10 times greater than the previous. There haven't been any VEI-8 volcanoes in the last 10,000 years, but humans have seen some powerful and devastating eruptions in our history. Here are three of the largest: 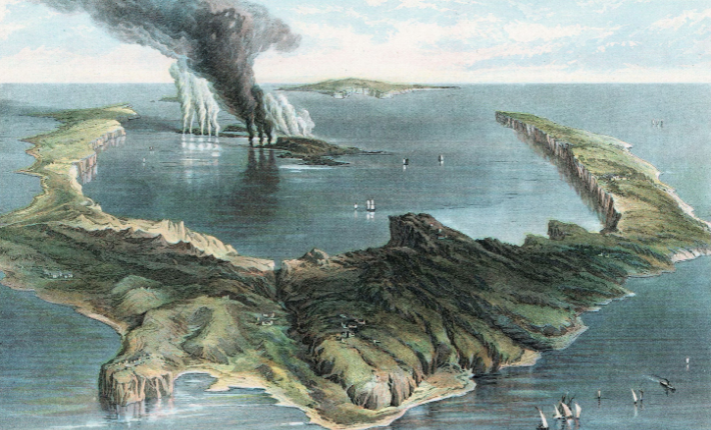 The volcanic island of Thera.

At the time of this article, the Tonga volcano eruption has not been given an official VEI ranking, however early data suggests that it could rank as high as a VEI-5. Some scientists are also comparing the eruption in Tonga to the Pintabu eruption of 1991 in the Philippines, which is a VEI-6. The powerful eruption in Tonga created a tsunami that caused damage as far as the West Coast of the United States and left 3 people dead, in addition to sending ash, fragments of rock, volcanic gas, and steam almost 20 miles into the atmosphere. It also created an atmospheric pressure spike that circled the Earth three times before dissipating, which caused the pressure spike reported by many Tempest Weather Stations.

As one Tempest user noted,  “It’s one thing to hear about something happening across the globe, but to see the ripple effect in your own backyard makes it tangible. A great teaching moment!"