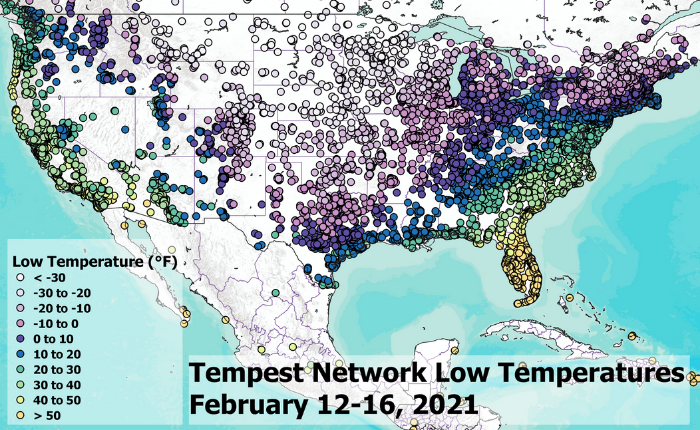 This week brought extreme cold weather to much of the United States, caused by a highly unusual weather pattern that pushed frigid arctic air towards the Gulf Coast. As the storm descended upon Texas, initial reports were lighthearted, with many residents in awe of the rare snowfall. But as the snow, ice, and frigid temperatures persisted, the situation quickly became more serious. WeatherFlow meteorologist Tony McGee, monitoring the company’s extensive weather network during the storm, reported, “Tempest stations measured sub-zero readings south of Dallas, single digits through Austin and northern Houston, and teens all the way to the coast.”

In response to the plunging temperatures, Texas residents turned up the heat in their homes, causing a dramatic spike in energy demand, which the state did not have the generating capacity to meet. This, in combination with frozen utility plant equipment, caused rolling power outages that persisted for days and impacted more than 4 million residents. These rolling blackouts are a last resort when power demand overwhelms supply and threatens to cause a wider power system collapse.

POWER GRIDS IN THE UNITED STATES

The United States has three power grids: one covers the eastern U.S., another the western states, and the Texas grid, covering nearly the entire state. This has been the case since the 1930s, when the Federal Power Act was enacted, charging the Federal Power Commission with regulating interstate electricity sales. In response, Texas utilities mutually agreed to provide power within the state lines, avoiding federal energy regulations. Today, the state’s grid is operated by the Electric Reliability Council of Texas (known as Ercot).

Utility companies and grid operators must closely monitor the weather to help forecast energy demand. Predicting extreme temperatures or weather events can help utility companies plan for higher than usual energy use. Ample weather data throughout a service area is critical, since the demand is spread geographically. A single weather station or data from a single source may not adequately explain the weather variations over a broad area, whereas a collective data set from both private and government sources provides a clearer picture of conditions and forecast weather to inform grid operators.

"A robust collective data set and enhanced spatial forecasts should be a priority for utility company's operation teams," explained WeatherFlow's Head of Business Partnerships, Keith Koenig. "They can then make better decisions in terms of daily energy demand, be better prepared for weather-related emergencies, and deploy emergency response assets more efficiently when such events are forecast."

After a similar winter storm in 2011, a national energy group recommended winterization guidelines for grid operators to implement, such as insulating pipelines. However, they were voluntary and required expensive investments in equipment and other improvements. As a result, the guidelines were not widely adopted. In light of the widespread outages caused by this most recent storm, Governor Greg Abbot has called for an investigation into Ercot to identify potential failures and prevent similar events from occurring in the future.

EXTREME WEATHER EVENTS TO INCREASE IN FREQUENCY AND SEVERITY

The winter storm that hit Texas in 2011 was referred to as a "once in a lifetime" occurrence, but this month's cold snap dispelled that notion. In fact, climate researchers warn that these kinds of storms will only become more frequent. Extreme weather is already the leading cause of electric power outage events, especially for the most significant disruptions. Grid operators and utility companies need to quickly take action, implementing strategies and improvements to make energy infrastructure more resilient and robust weather monitoring a bigger priority.