Meet the Tempest Innovators of 2021 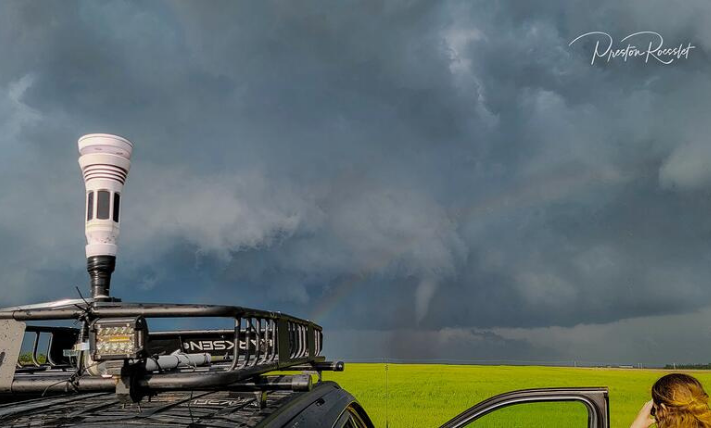 One of our Tempest Innovators, Preston Roesslet (#3) captured this image of a cone tornado while storm chasing near Lockett, Texas.

In our monthly Tempest Newsletter, we often feature Tempest users doing particularly cool stuff with their weather data. The creativity and ingenuity within our community never cease to impress and inspire us. If you want to be featured as a Tempest Innovator in 2022, tag us on social media @weatherflow. Without further ado, here are our Tempest Innovators of 2021:

Paul Stofer has been storm chasing since 2001 and has been part of several research projects observing hail development and tornadic thunderstorms. He uses WeatherFlow's original Smart Weather Station and Tempest Weather System to observe and record wind speed and direction, temperature, dewpoint, and pressure changes in mesoscale environments.Paul is based in Dallas, Texas but chases storms throughout the spring across the plains states. He also transmits live video and reports from his WeatherFlow systems to the web as well as back to the FOX TV affiliate in Dallas, Texas for on-air use during severe weather. Transmission capabilities are done through mobile broadband. Learn More >>>

Preston uses a Tempest mounted on top of his Jeep, with the Hub powered by the cigarette lighter and connected via Bluetooth for live data, which he uses to create severe wind reports. Preston has been chasing storms for about three years and is currently a member of the Met Crew Chasers. Fun fact: Preston is also a member of our customer support team! You can find him on Instagram @roessletwx.

As a child, Ross Forsyth remembers his father collecting and storing weather instruments and artifacts in hopes of one day founding a weather museum. Today, he serves as Co-Executive Director of that Museum. Check out our interview with Ross to learn more about what kinds of exhibits the museum offers, and how to get the kids in your life interested in the weather. Learn More >>>

Tony Rice is the Rowing Science Lead for Rowing Australia. He helped design and deploy a Regatta Weather System using the Tempest. This was used for both training and racing in Australia and in Tokyo for the Olympic Games. "We wanted an on-water system that was semi-permanent (could be deployed for weeks without the need for maintenance) and provided real-time readings at water level to determine the exact conditions that were being experienced by the rowers," Tony explained. "We designed a system that would enable a Tempest device to float on water with all infrastructure (network hub, internet connection, etc) self-contained in a single waterproof unit." View on Instagram >>>

Since childhood weather geek Vincent Toupet has been captivated by weather data, collecting measurements daily for things like temperature and precipitation on just a sheet of paper in his home. Fast forward to adulthood and Vincent is still obsessed with weather data, but collects his measurements with a more sophisticated personal weather station, enjoying the perks of being able to view his weather data even while out on the go. But Vincent became frustrated with the lack of data analytics in the user interface of many stations and decided to find a solution. He started a side project to create an application that would allow him to manipulate his weather data to create reports, compare weather with the previous day or year, and more. Thus, his app SmartMixin was born! Learn More >>>