Bob Baron is a legend in the weather world. A broadcast meteorologist in North Alabama beginning in the 1960s, Baron worked in radio and television for decades. After a devastating F4 tornado ripped through Huntsville in 1989, he decided to pursue a new mission. He stepped back from reporting the weather in 1996 to focus on his company Baron Weather, and in 2018 he launched the nonprofit Baron Critical Weather Institute.

Q: WHEN DID YOU FIRST BECOME INTERESTED IN WEATHER, AND HOW DID YOU PARLAY THAT INTEREST INTO A CAREER?

A: To be honest, I kind of fell into it. My early days were in rock and roll radio. I came to Huntsville in 1975, and I was a pilot, so I had some FAA weather training. And the television station, which was affiliated with the radio station, asked me if I would fill in doing Sunday night weather, in addition to the other things that I did, and I thought that sounded like fun. The morning after that I was at a hotel, and the guy filling the vending machines walked past me and asked, “Were you on television last night?" I was hooked.

I filled in for a year or so, and then our full-time weatherman took another position. They wanted me to stay doing the weather, so I went back and did the necessary schooling to become a professional member of the American Meteorological Society. That was the start of my career. I was honored in 2010 to be elevated to fellow of the AMS, so I got in kind of by the skin of my teeth. And the rest, as they say, is history.

Q: SPEAKING OF WEATHER IN HUNTSVILLE, WHAT IS THE MOST INTERESTING WEATHER THAT YOU'VE EXPERIENCED OR WITNESSED?

A: The most significant weather event for me and my career was the F4 tornado that occurred on November 15, 1989, ripping through Huntsville. It was without warning from the weather service or anyone else, and even when we knew we had a tornado, we didn't know how big it was or exactly where it was, what direction it was moving, or how fast. 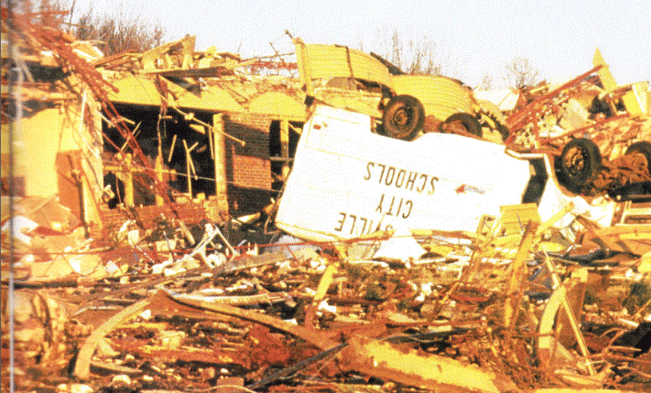 We lost 21 people that day and a couple more in the weeks that followed. It weighed very heavily on me because I felt like I hadn't followed through on my fiduciary responsibility to the public. And then, spending time with these latchkey kids that were at home when this whole thing happened was just heart-wrenching. As a result, I started my company Baron Services (so-called at the time), focusing on how we could do better. Developing weather tools that could provide better data and information about severe weather and then figuring out ways of getting that information to those in harm's way has been the company's effort for the last 30 years.

Q: YOU STARTED THE NONPROFIT BARON CRITICAL WEATHER INSTITUTE IN 2018 WITH THE MISSION OF PROVIDING WORLD-CLASS INSTRUMENTATION TO SUPPORT PUBLIC SAFETY, EDUCATIONAL OUTREACH, AND ECONOMIC DEVELOPMENT. CAN YOU TELL ME A LITTLE ABOUT WHAT THAT ORGANIZATION DOES AND YOUR REASONS FOR STARTING IT?

A: Over the years, we have developed many radar strategies that give us a lot of information about what's happening in the atmosphere above around 3000 feet. But, we have very little instrumentation that tells us what's happening at the surface of the Earth. So I retired from Baron Weather, and we incorporated this nonprofit. I have a strong sense that the state of Alabama can be doing a lot in the future for research and development (R&D) in many different areas, particularly transportation. Many people don't realize that we've got more navigable waterways in the state of Alabama than any other state. And we also have more weather than many other states. We've got hurricanes to the south, and then we've got almost tundra-type conditions, winter storms, in the northern part of the state. And, of course, we're subject to floods and to all the other things that occur. So this state would be primed for research into various aspects of weather, but we have very little instrumentation. My effort has been to consolidate what we do have.

We work cooperatively with the Alabama Department of Transportation (DOT), and the University of South Alabama has a weather network, and that's been included as well. Alabama Power has also become a wonderful partner for us because they've gotten excited about my effort to install a statewide, high-density WeatherNet with more than a single sensor and cam in each one of the counties of the state.

Q: HOW MANY TEMPESTS DO YOU HAVE AS PART OF THAT NETWORK? DOES EACH ONE HAVE A CAMERA?

A: We are up to about 40 so far, and they each have a camera. The institute itself is giving one Tempest station to each county, but the ultimate goal is to have 10 or 15 Tempests in each one of the counties in the state, and there are 67 counties, so a minimum of 670 locations across the state. It may take us a while, but I'm very excited about the kind of reception I'm getting. Learn More About Tempest Business Solutions >>>

Q: CAN YOU SPEAK ON THE IMPORTANCE OF PUBLIC AGENCIES AND PRIVATE WEATHER COMPANIES COMING TOGETHER TO ENHANCE PUBLIC SAFETY AND WEATHER FORECASTING?

A: Over the years, there's been a lot of lip service about private companies and the public sector coming together, but in reality, it's a challenge. One reason that I set up this nonprofit is so that we can do a better job communicating. I'm not sure that a private entity would be able to reach out to the Department of Transportation (DOT) in our state, for instance, as a nonprofit can. And it's the same way holding hands with academia across the state. So I think one of the major efforts of the institute is to break down silos. We're trying to bring the various entities that have an interest in weather and what they're doing into an overall network. I'm excited about the way things are changing here. For instance, the Alabama DOT converted their road weather systems from reporting about every 20 minutes to reporting minute by minute, which makes it possible for emergency management to use that information when they're monitoring dangerous storms passing through the area.

On the other side of the coin, the folks at the DOT wanted to know if there was a way that they could get access to information regarding inversions. They wanted to know when inversions existed, mainly because they're spraying herbicides, and if they've got inversions, it tends to spread that herbicide out. Then they get complaints from farmers whose crops have been affected. But with the help of the state climatologist, we're adding sensors at different altitudes so that we will be able to see when the best time is for them to apply their herbicide. This is the kind of inner cooperation that I'm trying to achieve.

Q: WHERE DO YOU SEE THE BARON CRITICAL WEATHER INSTITUTE IN 20 YEARS?

A: I would like the institute to be the custodian of the instrumentation and experiment with new means of determining things. As an example, the concept of putting instrumentation aboard drones, and instead of having weather balloons, we would be able to have a system of drones across the state. I think that's actually very workable, we just haven't gotten that far. There's that crawl, walk before you run type thing. And because of our association with Alabama DOT, there's a substantial interest in intelligent transportation and some of the instrumentation that's used.

Weather affects everyone, and businesses and communities are no different. We’re here to help organizations better understand current and near-term weather impacts. Get to know the TempestOne platform solution that empowers you to prepare and respond by harnessing and utilizing localized weather data. Learn More >>>

Research from the University of Washington and Harvard University finds that by the year 2100, many parts of the world will experience dangerous heat stress conditions, even if Paris Agreement goals are met. Using heat index measurements, a research team created a variety of scenarios for the year 2100. In the worst-case scenario, conditions in which humans should not be outdoors could become common in countries close to the equator.
Read More >>>

HOW a GIANT SPRINKLER SYSTEM COULD help THWART wildfiREs in spain

Prolonged drought and soaring temperatures have made 2022 the worst year on record for forest fires in Spain. But a small town near Valencia called Ribarroja has created a unique defense system against a potential blaze – 40 gigantic water sprinklers surrounding the town. Known as the Guardian project, the system uses recycled water from nearby homes to shower the trees, bamboo, and other vegetation that sit below. Read More >>>

WHY SEPTEMBER IS THE NEW MAY FOR GARDENERS

As the summer garden season begins to wind down for many parts of the United States, former senior director of the Pennsylvania Horticultural Society’s Meadowbrook Farm, Jenny Rose Casey, makes an appealing case for the autumnal garden. By thinking about the types of flowers in your garden by their size, shape, scale, and even color, you can easily create a fall garden of your own that will stay vibrant and strong until the first frosts of the season. Read More >>>