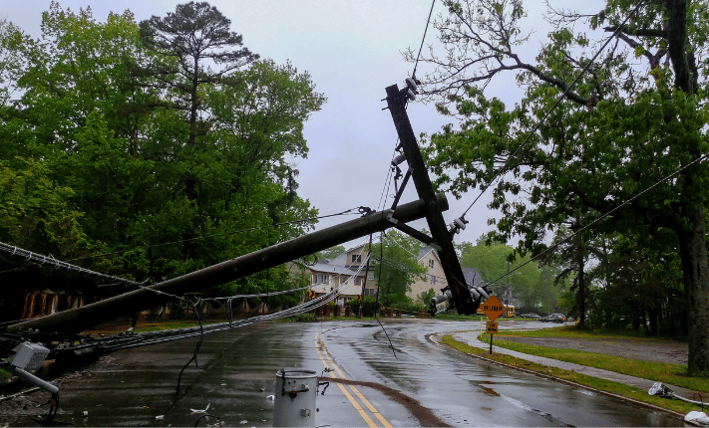 In the span of roughly 24 hours before landfall, Hurricane Ida quickly ascended to Category 4 status as it moved through the Gulf of Mexico. The culprit that caused the sudden strengthening of the storm? Abnormally warm water that boosted wind speeds and sent the storm surging. Scientists say these rapidly intensifying storms will become more common as climate change continues to heat the Earth.
Read More >>>

Despite last years’ quarantine slowdown, global greenhouse gas emissions are on the rise - along with temperatures, sea levels, and other metrics used to measure our planet’s health. NOAA’s State of the Climate in 2020 reports some of the worst measurements for many metrics we’ve ever seen, and experts are concerned that without major changes to reduce emissions things will only continue to get worse.
Read More >>>

CATCHING UP ON AIR QUALITY

It’s common to check the weather every day to get an idea of what it’s like outside our homes – temperature, wind, rain…but what about air quality? The Air Quality Index has been around for decades but checking and understanding what the values mean for you has become increasingly important. Learn more about one event that helped trigger the creation of the EPA and how to understand AQI ranges.
Read More >>>

The smoke from recent wildfires in California and Oregon has led to record-breaking hazardous air quality. At times, the Air Quality Index (AQI) has measured as high as 600 —a staggering number, given that prolonged exposure to AQI over 150 triggers emergency health warnings. As a result, air quality apps and home monitors have become more critical than ever, and one innovative program is making air pollution part of a school curriculum.

Kids Making Sense(KMS) is an air quality curriculum and kit that teaches middle school and high school students how to measure air pollution sensors, interpret the data they collect, and take action to reduce emissions and exposure to air pollution around them. The results are fascinating, and Olivia Ryder, the lead scientist at KMS, tells us about deploying air sensors as an education tool.

Q: WHAT A SMART EFFORT. AND IT COULDN'T BE MORE TIMELY. TELL ME MORE ABOUT KIDS MAKING SENSE.

A: It’s a program and kit produced by Sonoma Technology, which is a technology-based environmental consulting firm in Northern California. Over eight years, we developed this program with various environmental groups, the EPA, local air districts, and a network of teachers. It has evolved into a standalone program and has been used in over 300 classrooms in the U.S. and abroad.

Q: WHY AIR POLLUTION? BECAUSE YOU STARTED THIS BEFORE FIRES WERE A REGULAR PART OF OUR LIVES.

A: Sonoma focuses on air quality and air pollution—that is our main area of work. We work on a lot of projects with groups across the country and the world. I do lots of data analysis, some of which involves analyzing data for community monitoring projects, where we investigate things such as metals in the air that communities are exposed to, we can determine where the metals originated, and whether the levels have serious health implications.

We realized there was a need for environmental education in classrooms. The program evolved organically. It started out as a few lessons. Our scientists would go out to classrooms and teach. It developed and we put together a whole kit that we market to schools.

Q: DOES SONOMA MAKE THE AIR SENSORS TOO?

A: We don’t only make sensors. Sonoma has a measurements group that deploys sensors, then we work on software and do modeling. For example, we’ll tap into all the monitors out there - some are very expensive research-grade sensors that can detect metals. And others, including the sensors we give out as part of Kids Making Sense, are low-cost sensors that also detect particles.

Q: WHAT IS IN THE KIDS MAKING SENSE KIT AND HOW DOES IT WORK?

A: The kit comes with all the materials you would need to run the classroom program as it stands: five android cell phones, five AirBeam sensors that measure particulate matter and send the data back to an interactive map via cell phone. There are workbooks, curriculum, teachers guides, graduated cylinders, a vacuum cleaner, and coffee filters. The workbooks contain eight modules that build upon each other and pose some foundational questions for the students to answer.

Q: CAN YOU DESCRIBE SOME OF THE CONTENT IN THE MODULES?

A: One begins with the simple question, "What is air pollution?" which gets the kids thinking about what they are breathing. There is also a particles module, which teaches about taking measurements, figuring out what the health and environmental implications are and where the pollution comes from. They do their own measurements using our sensors, then learn about analysis and interpretation of the data. Another module encourages kids to share their findings and suggests some ways to spread the word about what they may have found.

A: It is awesome! It empowers students to drive positive change during a time when they are forming their own transportation and consumption habits. Students are able to interact directly with air quality scientists, and they learn how to use their results to approach policymakers.

Also, the sensor that we have now is an instrument in a solid case, but we will soon be including an updated WeatherFlow-Tempest AQ Go device with a clear case. That will take out the black-box nature of air measurements and allow students to see the electronics. The new sensor will have the parts labeled so the kids can see where the sensor is, where the wifi module and the PCB boards are. It’s exciting to me that this is something that also allows us to talk about electronics and engineering.

Q: WHAT HAVE THE KIDS FOUND SO FAR?

A: One group of students in Los Angeles measured a freeway overpass close to our school. On the way back, they stopped at a restaurant. They found levels in the restaurant that were significantly higher than the overpass. It had to do with charbroiling activities in the restaurant. The kids presented their findings to the local community and air district board. The board ended up reconsidering regulations in fast food restaurants.

In another instance, students were concerned about pollution from idling school buses at their high school. They did measurements and found there was not an idling problem at their school but they found the middle school next door did have an idling issue. There are real outcomes!

Q: HOW MUCH IS THE KIT AND HOW MANY STUDENTS HAVE COMPLETED THE PROGRAM?

A: The kit is around $2600. Kids can work in groups of five or in pairs, and up to 25 students can use each kit. To date, it’s been used in 300 classrooms worldwide, most recently in Newcastle in the UK. We are taking it to India and Columbia and Malaysia. It’s growing quickly!

Learn more about Kids Making Sense and their STEM classroom kits at https://kidsmakingsense.org/.