Map of Hurricane Ian from the TempestOne web app before the storm made landfall in Florida.

Quelled by dry air in the Atlantic, the current hurricane season had been uncharacteristically quiet before September. So how did Hurricane Ian gain enough momentum to turn much of Florida into what some residents are calling an “apocalyptic scene”? WeatherFlow-Tempest meteorologist Tony McGee walked us through Ian’s formation and explained his team’s role in tracking the historic storm.

Rising levels of greenhouse gases prevent heat radiating from the earth’s surface from escaping into space as freely as it used to. As a result, oceans have absorbed nearly 90% of this excess atmospheric heat, particularly in the top 700 meters of the surface. The Caribbean waters that fueled Ian were about 1.8 degrees Fahrenheit (1 degree Celsius) warmer than usual. These warming sea surface temperatures helped the storm “turbocharge.”

After increasing to a Category 3 storm, Hurricane Ian tore through Cuba on Tuesday, September 26, 2022. The storm caused widespread blackouts and flattened homes, businesses, and critical agricultural infrastructure. While it was clear that the brief period over Cuba would not significantly disrupt Ian, the additional rapid intensification that occurred after it emerged over the Gulf of Mexico was at the upper end of expectations. 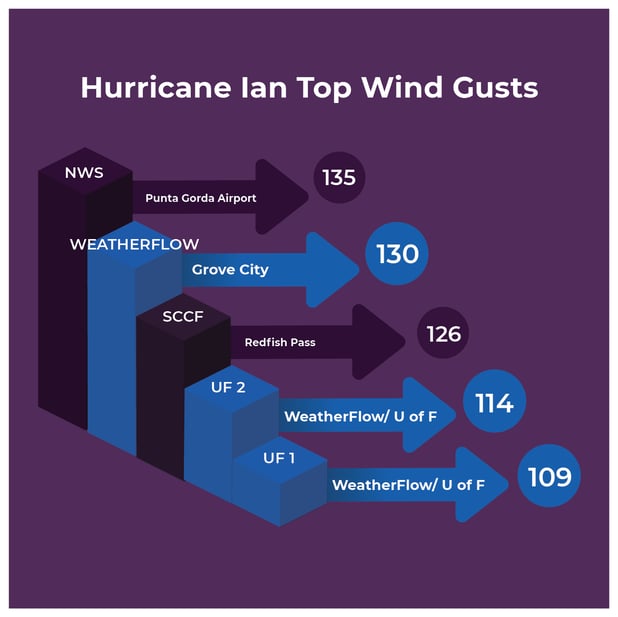 The meteorology team at WeatherFlow-Tempest was monitoring Hurricane Ian as it approached Florida.  Tony McGee remembers the growing concern that Ian was shaping up to be catastrophic for Florida. “While every storm is different, we knew Ian was going to be significant,” explained McGee. “Our leadership team made the call to offer free access to the TempestOne platform to enable anyone to track the storm in real time. When public safety is at risk, that’s a no-brainer.”

As researchers and scientists collect more data about hurricanes, there will be a greater understanding of what hurricane changes are human-caused global warming. The climate debate underscores the importance of accurate weather data to help present an unbiased look at the future, ensuring we are all better prepared.

Hurricanes and tropical storms, cyclones, floods, wildfires, and even droughts can have disastrous (and expensive) effects on the communities and environments they impact. According to NOAA, 2021 was the third-costliest year for extreme weather events in U.S. history behind 2017 and 2005, when parts of the country were struck by hurricanes Harvey and Katrina, respectively. Read More >>>

The 2022 hurricane season has seen nine named storms already, with four reaching hurricane status and two being ranked Category 3 or above. Take a look at how early predictions have fared so far. Read More >>>

THE FUTURE OF CLIMATE ACTIVISM ISN'T WHERE YOU THINK

A bid for inter-generational climate activism was made at the climate conference in San Francisco late last month when 20-year-old climate activist Sophia Kianni highlighted the small reach that climate science research makes among the general public, especially older generations. Her solution to creating a more climate-conscious world for all generations? TikTok. Read More >>>

Record-breaking floods have left millions of farmworkers across Pakistan struggling to salvage what they can from ruined summer harvests and damaged crops. In some of the hardest hit regions like the Sindh Province, floodwaters overtook entire villages as homes, buildings, and the crops that sustained the farmers and families living there were destroyed. Scientists are saying the rapid increase in floodwaters to the area comes from a combination of record monsoon rains and heavy glacier melt, both factors being intensified by our changing climate. Read More >>>