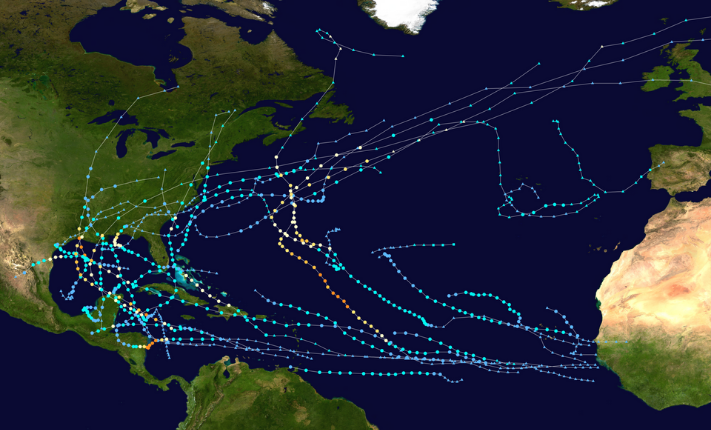 The 2020 Atlantic hurricane season surpasses the 2005 record of 28 storms in a season with the emergence of subtropical storm Theta over the northeastern Atlantic - the 29th storm of the season.  Read More >>>

LANDING FOR LONGER - WHAT DOES IT MEAN?

The average weakening time of a hurricane after landfall has increased by over 90% in the last 50 years, meaning higher winds and more damaging storms for inland populations. Read more >>>

Using the past to predict the future

Climate experts make an argument for the inclusion of paleoclimate recordings in climate models to improve their accuracy in future climate predictions. Read more >>>

METEROLOGY AROUND THE GLOBE

It all began with a request from Uruguay back in 1988 - today, the Weather Prediction Center International Desks has helped almost 400 individuals from over 30 countries around the world receive meteorology training.  Read More >>>

Tempest innovator of the month

Get your daily weather data at-a-glance thanks to WallGuage for Tempest, a fully customizable weather gauge based off the WeatherFlow API that can be mounted right on your wall! Made possible by this month's Tempest Innovator John Rucker, learn how to build your own over on the Tempest Forum! Read more >>>

…..with Dr. Marty Bell, Lead Meteorologist and Director of Research & Modeling at WeatherFlow.

I caught up with Marty at his home in Fort Collins, Colorado, managing his new puppy Bo while monitoring Category Five Hurricane Iota, the second devastating major hurricane to impact the Nicaraguan coast in two weeks. I wanted to hear Marty's perspective on this record-setting hurricane season and other recent extreme weather events.

Q: Can we talk about some of the crazy weather we saw in 2020? This year just broke the record for the most active Atlantic hurricane season and the wildfires that continue to burn in the West. Have there been more events that maybe aren't on everyone's radar?

A: I think most of this year's crazy weather has on everybody's radar. For me, the fire and tropical storm seasons for the US rank equally at #1 for having been both record-setting and extreme.

Q: What about something happening that is not on people's radar as much?
A: Well, you think of Death Valley as being a hot place. It had the highest recorded temperature ever this year. Death Valley was the hottest it's ever been. Florida and Denver also set heat records for hot days. There was intense heat all across the US all summer. Siberia had a record heat year as well. There's a town in Northern Siberia that topped over 100 degrees one day, which is unheard of for Siberia!

Q: Sounds like heat is the biggest extreme weather story of the year?

A: Yes, I think so. One day, Denver reached 101, then two days later, it was below freezing and in a winter weather advisory. It was the biggest two-day temperature change on record in the US. So yes, unsurprisingly, heat is the big story.

Q: And isn't it extreme heat that caused the fires?

A: Yes, our extreme fire weather had its roots in hot dry spring, and that dryness continued right through the year into fall. When you have a dry hot spring, you know you're going to have a long fire season and that you are going to set records with fires.

Fire seasons are very sensitive to high winds and temperature, and low humidity. And fires get to a tipping point -if you nudge over the tipping point, things become explosive in terms of fire behavior. We saw this across the West, with 4% of California burning and a Colorado fire growing by 140,000 acres in just 24 hours.

Q: Were these the same conditions that led to the fires in Australia?

A: It does compare. Australia had a long, record hot, dry year and the conditions regularly went over the edge from where the fires are containable to explosive growth.

Q: Would heat also be to blame for the intensity and record number of tropical storms too?

A: There is a strong tie between the heat in the ocean and tropical storm activity. The Atlantic Ocean has been warm this year, and combined with favorable la Nina atmospheric conditions, the warm water has led to a record number of tropical storms in the Atlantic (30), with a record number of those (12) making US landfall. These warmer water temperatures also contributed to the rapid intensification of a record number of Atlantic storms (10), which means they become powerful very quickly and limit people's ability to secure property and evacuate. We're seeing the effects of that right now over Honduras and Nicaragua with Cat Five Hurricane Iota.

Just two weeks ago, Hurricane Eta spun up quickly off the Nicaraguan coast and made landfall as a Category 4 storm. Usually, when a storm goes over the water, the extremely low central pressure sucks up cold water from deeper in the ocean, cooling the surface. The trail of cooler water left in the wake of the storm usually deprives following storms the energy they need for intensification. But that's not what happened. Iota formed in the same part of the ocean and rapidly intensified to a Category 5 hurricane, and it's in the process of making landfall in the same area. It's unusual to see hurricanes making landfall in the same area.  Both storms would be devastating in their own right; having two such storms in periods of two weeks, you're going to see a change in the landscape. It's going to be devastating.
Q: Are you able to predict something like that?

A: You can with the right inputs. Models are designed to represent the physical, atmospheric, and oceanic processes and initialize with the atmosphere and ocean's observed state. If there's enough energy in the ocean to support another storm because of how warm the ocean is, then the models can predict it. That's the climate signature. That's what climate experts are teasing out.

It's always tricky to attribute extreme events to climate change. But we know the climate is changing. We know the ocean and atmosphere are warming, that the glaciers are receding, sea levels are rising, and that the concentration of greenhouse gases are increasing. We can measure those things, and observe patterns -there's an undeniable slow, relentless, steady change going on. While these changes are easy to measure, it's harder to say a particular extreme weather event is the result of the changes. By their very definition, extreme events are relatively rare and difficult to quantify statistically. However, indications are that the increase in number and severity of extreme events that we have been talking about are linked to the gradual changes in climate. There is an increasing body of evidence over the last few years to support this. The record heat, wildfires, tropical storms, and even extreme precipitation and flooding events can all be linked to a warmer atmosphere.

Q: So the heat is amplifying the system.

Q: How does the year compare, in your opinion, to other years/decades that you've been a meteorologist?

A: One thing to consider with climate change is that the average change occurs very slowly, so slowly that most people don't feel the change. And we, as humans, can adapt to slow change. But the impacts of climate change aren't going to be gradual. They are going to be felt more as a result of extreme weather events.

For example, flood protection and pumping systems can be built to adapt to gradual sea level change and most expected tropical storm events. With higher sea levels, storm surge flooding will have higher peaks than similar storms from previous decades. Those events are the ones that will cause widespread flooding, which threatens lives, destroys property and dislocates people from where they live.

Same with fire season - it's not the average day that will destroy an entire town. The warmer the atmosphere, the more often we will see extreme fire weather, and it's those extreme events that will result in millions of acres of burnt forest and the towns that can't be saved.

Over the next few decades, we will see climate change through a sequence of extreme weather events, and that is how climate change is going to impact humanity. Over the longer term, impacts become even more challenging as global warming impacts, for example, agriculture.

A: It is statistically unlikely that we will see the extremes that we have seen in 2020 again in 2021, but not impossible. If we continue to see the heat, wind, and drought that we saw this year, we will see many fires. And if we continue to have warm ocean temperatures, we're going to see more strong storms.

Q: But haven't the last few years broken records for heat, fires, and hurricanes every year?

A: It is true that global temperatures are steadily rising and that we are seeing a lot of record heat years in a lot of locations. But weather has year to year variability which is often greater than the average rate of climate change, and individual weather events can exhibit even greater variability. So you can't expect the weather to be more extreme every year due to the changing climate. However, we can expect to see more extreme, wilder weather events, more often, as the planet heats up.

Q: Marty, gosh, is there any other uplifting news you'd like to leave us with?

A: Technology will aid us in overcoming many climate change impacts, but based on recent history, extreme weather related to climate change is going to be a challenge that will require collaboration between the public, private, and academic sectors in the global weather enterprise.


Interview by Ann Marie Gardner. Find her on Instagram @thenewweather