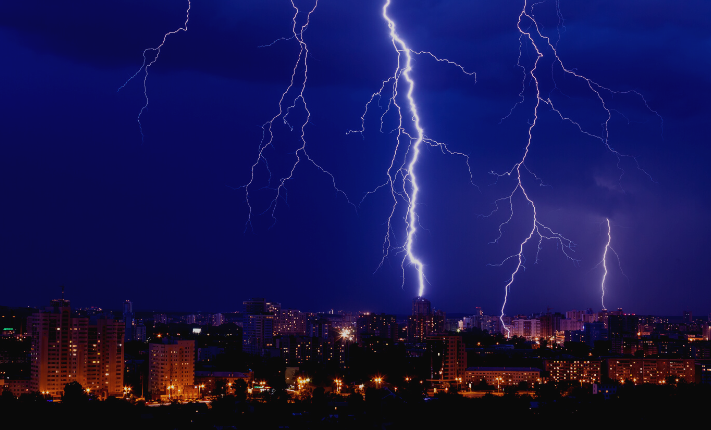 Lightning is one of nature's most recurrent and common weather spectacles. There are millions of lightning flashes around the world each day, igniting wildfires, damaging property, and even causing injury and death to humans and animals.

Q: HOW DID YOU GET STARTED IN THE LIGHTNING BUSINESS?

A: I earned my degree in Computer Science in 1990 from the University of Central Florida. Initially, I was working on large-scale communication systems as an engineer. While there, I worked with the founders of TOA on Time Difference of Arrival tracking of radios and cell phones - back when everything was analog. After that, I continued to do work in the Time Difference of Arrival world on similar technologies. I joined TOA in 2009 and led the engineering team in advancing their lightning products. Since partnering with WeatherFlow-Tempest, we have been integrating technologies to become the backbone of the new Tempest Lightning Network, which launched just this week.

Q: CAN YOU EXPLAIN WHAT CAUSES LIGHTNING AND DESCRIBE THE POWER OF A SINGLE LIGHTNING STRIKE?

A: In the case of lightning, you've got a cloud that has a bunch of charges on ice crystals that are forming and moving around within it. As they strike each other, some charges are exchanged between these ice particles. The positively charged particles tend to rise to the top of the cloud, and the negatively charged particles drop to the bottom. Typically, the ground below has a positive charge as well. So there is a contrast between the bottom of the cloud and the ground where those charges are so different that they are attracted to each other. Once the charge become so different, they form a connection - and that's how lightning is formed.

The connection is established by the negatively charged ions dropping toward the ground and the positive ions moving up at the very end from the ground. Once those connect, you get this huge flow of electrons through that ionized channel, and that's when you see lightning. It's a huge, massive amount of energy that's discharged between the cloud and the ground in a very short period.

Q: AND HOW IS LIGHTNING TYPICALLY DETECTED?

A: When lightning occurs - when that big discharge happens down the ionized channel - it essentially acts like a large transmitting antenna. But instead of a radio signal being propagated through to play music or something, it's this one huge discharge of energy. And it produces a massive RF (Radio Frequency) signal that gets generated with most of the energy down and what we call the VLF, or LF (very low frequency or low-frequency) range, which then propagates out from that, similar to a transmission tower. Our sensors detect that signal. If you've ever been in a car listening to AM radio during a lightning storm, you probably heard the cracks and pops of lightning happening; that's effectively the signal that we're picking up on the sensor.

Q: CAN YOU EXPLAIN THE DIFFERENCE BETWEEN CLOUD-TO-GROND AND GROUND-TO-CLOUD STRIKES? NAMELY, WHICH ONE SHOULD PEOPLE BE MORE CONCERNED ABOUT?

Cloud-to-cloud strikes are not dangerous to people on the ground, though they can indicate that a cloud-to-ground strike is about to happen. But the cloud-to-ground strikes are what people need to be very careful of since they can be very dangerous for humans and animals and very damaging to equipment and other things on or in contact with the ground.

Q: YOU PREVIOUSLY MENTIONED TIME OF DIFFERENCE OF ARRIVAL (TDOA). CAN YOU EXPLAIN THAT TECHNIQUE?

A: When our sensors pick up a lightning signal, each one has an extremely accurate time reference. So when the signal arrives, it determines the exact time that that signal arrives with that sensor. So that's the time of arrival on that sensor. When you have two sensors that pick up the time of arrival on each one, there is a difference of time between the two, and that is the Time Difference of Arrival. Mathematically, if you have a difference in time of arrival, you can calculate the mathematical equation for a hyperbola between the two sensors. So adding a third sensor gives you two sets of hyperbolas. And the intersection of those hyperbolas is where the source signal came from, or in this case, where the lightning strike occurred. So the big advantage of Time Difference of Arrival is that no matter what the distance is, the calculation remains accurate. It doesn't suffer from some of the issues of direction finding, a common way to determine distance or location by other lightning providers.

Q: SO THE MORE SENSORS YOU HAVE, THE MORE ACCURATE THE READING?

A: Correct. Not only do you have the ability to detect more events, but you have more geometric options to choose from to optimize the geometry of the calculation to get an even more accurate location.

Q: WHAT ARE SOME OF THE CHALLENGES OF LIGHTNING DETECTION?

A: The biggest challenge is building the network. You can't locate lightning with a single sensor. You realistically need at least five sensors to perform the calculation with a certain level of confidence. So, to build a network, you have to start with a minimum number of sensors and then build it out from there. We typically try to locate our TOA sensors about 100 kilometers apart, so not only do we have to get the sensors out there, but we need to find locations where the sensors can be installed to optimize the geometry of the overall system you're trying to create.

Q: WHO IN PARTICULAR BENEFITS FROM LIGHTNING DETECTION?

A: The biggest group that benefits from lightning data are those tasked with ensuring public safety. This is often people that are in charge of safety for shipping terminals, tarmacs at airports, shipping ports, or anywhere there's going to be people that work and play in potentially adverse weather conditions. You can load a plane with cargo in the rain, but if lightning is present, you need to get everybody to safety.

The most important and useful benefit of having high-quality lightning data is that you can see where it's coming from and how it's moving, and you can make the decisions to save lives and protect assets. There are other purposes, like historical data for insurance companies, which enable them to validate claims. For example, when somebody reports that they had a fire caused by lightning, the insurance company can validate(or invalidate) that claim in part by looking at the lightning data. And, of course, news organizations and mobile apps that broadcast weather data like to show lightning reports, and a lot of other weather enthusiasts also like sharing that kind of information.

A: There has been some research into how to correlate lightning activity with certain types of weather activity, such as hail. I was even talking with somebody this morning about the eyewall development of a hurricane. Lightning activity along the eyewall changes at different times, so you'll get almost no lightning for a while, and then you'll get a large amount of lightning on the eyewall. There's a lot of interest in finding out if there is a correlation there. For example, is there more lightning during the regeneration of the eyewall?

The interesting thing about lightning is that we can detect it much farther than radar can, so if there is a storm out in the Atlantic or a typhoon on the other side of the world, you'd be able to determine what's happening within that hurricane based on lightning activity.

Q: FOR THOSE WHO ARE NOT FAMILIAR, CAN YOU EXPLAIN WHAT THE TEMPEST LIGHTNING NETWORK IS?

A: The Tempest Lightning Network is a global network of sensors capable of detecting individual lightning strikes and providing an accurate location of where that lightning strike occurred. This works over fairly large distances. So, for instance, we can detect lightning thousands of kilometers away from the nearest sensor. The Tempest Weather System's lightning sensor is very efficient at detecting local activity and determining a range, but it doesn't necessarily provide the precise location of the strike.

A: One of the most interesting sensors we've installed was on Penrhyn Island in the Cook Islands. It's this tiny atoll in the middle of the South Pacific that has virtually no landmass to it. And to get our sensor there, we had to send a guy that had to wait a week to get on a boat. And once he got to the island, he had to wait another week to get back off the island because they only send boats there once a week. And that sensor runs exclusively on solar power and a diesel generator, and it uses satellite communications for data transfer. It's truly in the middle of nowhere. I'd love to go to that one. Just to see this little remote atoll.

Learn more about the Tempest Lightning Network and how you can stay safe when lightning is close by.

Hundreds of leaders from around the world gathered in Sharm el-Sheikh, Egypt, earlier this month to discuss global efforts to reduce greenhouse gas emissions and finance the costs of climate change. As extreme natural disasters become more common, more destructive, and more deadly, climate change is becoming more important than ever for many nations around the world.
Read More >>>

A recent study explains that climate change could alter lightning patterns across parts of Northern and central Europe. Researchers from Newcastle University and Met Office found that more frequent, higher energy storms will occur but produce less lightning over lower terrain areas like central Europe, while more lightning is likely to occur at higher altitudes like over the Alps and other parts of Northern Europe. Implications of these pattern changes could include an increased risk of wildfires due to lightning, risk to property, human life, and more. Read More >>>

Electric Vehicles are Officially on the car-market scene

Electric Vehicles are currently the fastest-growing segment of the auto market, almost doubling their share of new vehicle sales in 2021. Originally reserved for the more affluent or especially environmentally conscious, electric vehicles are becoming more popular as prices begin to come down on the vehicles and skyrocket for gasoline, leaving many wanting to ditch the status quo when it comes to fueling their vehicles. Read More >>>

While year-round outdoor gardening may not be accessible to most (unless you’re lucky enough to have a greenhouse), indoor herb gardening is a great way to keep flexing your green thumb in the off-season and produce deliciously fresh herbs and spices all winter long. From choosing the right location and containers, selecting your seeds, and keeping your plants watered and fertilized, indoor herb gardens are easy to adapt to your needs, add greenery to your indoor space, smell great in your home and taste great in your dishes!
Read More >>>