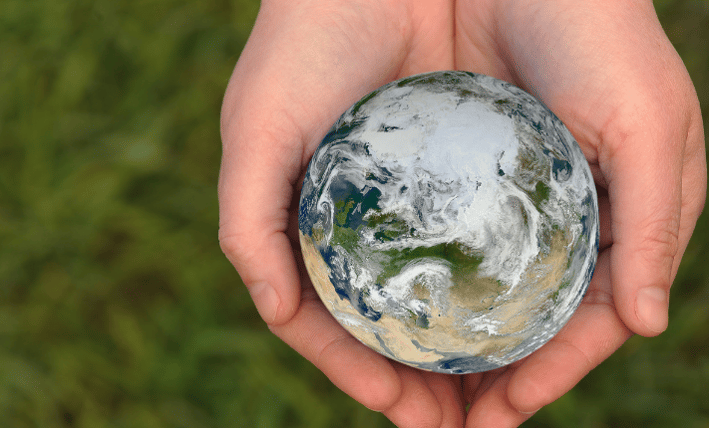 The 26th Conference of the Parties climate conference kicked off on October 31st. Over 100 heads of state and thousands more diplomats came together in Glasgow, Scotland, to discuss global warming impacts and set new emissions goals on resources like coal, oil, and gas. But what exactly will happen during the 12-day event, and why are scientists calling this year's event the most critical yet?

HOW THE PENTAGON IS PREPARING FOR CLIMATE CHANGE

The U.S. Department of Defense recently released a climate risk analysis report that addressed the department's worsening challenges due to climate change. From billions of dollars in damages to military installations to the increased number of personnel necessary to tackle extreme climate events, the DOD is increasingly considering the effects of climate change and extreme weather events in their plans for the future.

In late October, the White House released the largest clean-energy investment in U.S. history with the Build Back Better plan – a $555 billion package aimed at reducing harmful greenhouse gas emissions through new policies, grants, and tax credit opportunities. The Build Back Better plan is six times larger than the 2009 Obama-era clean energy bill and is suggested by experts to reduce U.S. carbon dioxide emissions by about a gigaton.

IF YOU'VE VISITED THE BOOKER T. WASHINGTON NATIONAL MONUMENT IN VIRGINIA, YOU MAY HAVE COME ACROSS BETSY HAYNES, A PARK RANGER WHO EDUCATES THE COMMUNITY ABOUT THE CIVIL WAR AT THIS NATIONAL PARK SERVICE SITE.

But regularly (and more regularly now with the increase in wildfires), she packs her kit and sets off to help out in fire zones. After decades fighting fire on the ground, she now works as a public affairs specialist on fires. Tempest tracked Betsy down at the park to ask her about her double life, find out how she got into fighting fires, and talk about the weather.

Q: BETSY, IS IT TRUE YOU'VE BEEN AT THE PARK FOR OVER 30 YEARS? HAVE YOU BEEN FIGHTING FIRES AS LONG AS THAT TOO?

A: I’ll have been at the park for 32 years in February.

Q: I'M CURIOUS WHAT TRAINING YOU NEED TO WORK FOR THE NATIONAL PARKS AND ESPECIALLY FOR FIGHTING FIRES.

A: Well, I was trained in historic preservation, my degree was not in firefighting. That was a collateral duty that I took on later, as an extra way to make money.

Q: HOW LONG HAVE YOU BEEN FIGHTING FIRES THEN?

A: I fought my first fire in 1991!! It was on the Blue Ridge Parkway. Years ago, we didn’t have much training- my training consisted of watching a video, then doing a pack test (work capacity tests used to qualify individuals for the three levels of wildland firefighting duty). For this test, I wore a pack and stepped up and down on a high box, and you passed if you were within a range of resting heart rates.

Today the pack test involves running 3 miles in 45 minutes with a 45-pound pack on your back. That’s a firefighter Type 2 test. Years ago, I was in good shape. I could do it. And I took it for many years. But I don’t fight fires anymore, I’m now a public affairs specialist on fires.

Q: I WANT TO TALK ABOUT THAT BUT FIRST, TELL ME ABOUT FIGHTING FIRES. WHAT'S IT LIKE? IS IT SCARY?

A: When I was doing it, a few times were scarier than others. Type 2’s (which is what I was trained for) usually hike in, and we’re usually groups that come from the East Coast when it gets really bad out West. Typically we would go out in 80 people modules. They would charter planes for us and put us on fires where needed.

In the beginning, we would go out for 21 days. We had a red bag to carry all our belongings in and a yellow backpack containing all our fire shelter clothes (which you’d have to have on. ). We would dig a line around the fire (called a blivit or a pumpkin) for an emergency water storage tank. Then helicopters would come through and drop water in that. We couldn’t carry water up the mountains.

Q: THAT SOUNDS DANGEROUS! YOU MUST HAVE ONE GOOD SCARY ESCAPE STORY!?

A: The scariest one was in Washington state. I was working the night shift when the fire blew up a bit from lightning. Lightning does that - it sparks everything and makes it worse. We were up pretty far and it was hard to get us. And at that time there weren’t cell phones! 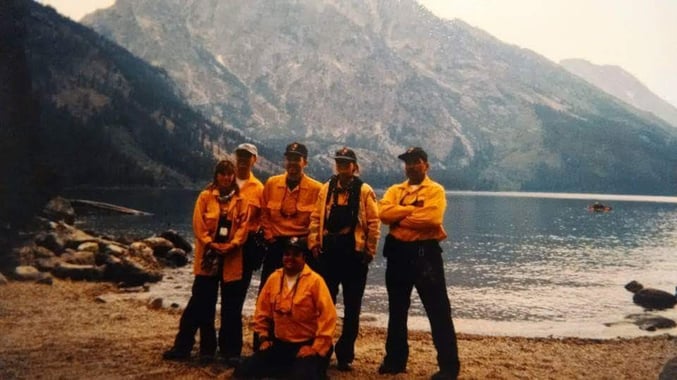 Q: HAS YOUR EXPERIENCE WITH FIRES CHANGED THE WAY YOU CHECK OR THINK ABOUT THE WEATHER?

A: Not really when I’m here in Virginia. We have a lot of rain and it’s not as dry here. But, out West, it’s a whole other ball game.

Boise is home to the National Interagency Fire Center (NIFC). It’s made up of a lot of people from different agencies —NOAA, BIA (Bureau of Indian Affairs), Bureau of land management, National Parks Service, and many others who are housed there at the main NIFC office. As part of the public information team, I know that we have meteorologists working on most of the more significant incidents from Boise. In addition, there are incident meteorologists who work for NOAA. They help us and lend us the machines that pick up the data - they will put them in certain areas of the fires to get real-time measurements. Of particular importance are wind measurements. Knowing the wind is vital on a fire. You need to know where to put the crews. If the fire is really bad, the incident meteorologists can forecast in the morning, tell you where to be, what to be aware of, and then maybe send further updates on the radio. Understanding the weather is essential for the safety of people fighting the fires and figuring out a strategy to manage the fires.

Q: SO, WHAT DO YOU DO NOW AS PART OF THE PUBLIC INFORMATION TEAM?

A: I help disseminate critical info to locals and the media. Now I operate outside the hot zone but still close enough to the fires. I was in California this year and also in Montana on the Divide Complex-Balsinger Fire. Every fire is different and depends on the state you are in, the vegetation and elevation, and urban interface. So if there are towns close by and cattle farms, we’ll sometimes have to do evacuations and communicate which roads are closed.

Q: HOW DO YOU GET THE WORD OUT?

A: When I get out there, I would go to early morning briefings, look at maps, see what’s going on. We answer phones through firenet.gov and do a lot through Google voice. We can do so much more through computers now and get information out electronically. Things have really changed for the better using technology for distributing information in the fires. Plus there are so many more people in harm’s way now.

Q: CAN YOU SHARE WHAT YOU'VE LEARNED WORKING ON FIRES?

A: I did ‘learn by fire’. When I got to the Park Service, my boss bought me boots, and the next thing I know I’m on a fire in the fall with leaves. And my first western assignment was in the Tetons in Wyoming. I had some experience on forest fires before I went west but I had no idea what I needed. It was freezing cold in July. I didn’t know about blisters...they are a big deal when you are fighting a fire - you need moleskins and band-aids. And it was really cold at night, you have to drink a lot of water. I learned a LOT!

Q: WAS IT EXCITING?

A: TV makes it look way more exciting than it can be. We were hand crews putting a line around a fire. With me, I fought forest fires until I had knee surgery. Most of the people I fought fires with—we’re all older now—many have moved into management positions. In public affairs, you need people who have experience working fires.

But in 2014, I had a fun summer. I got to do a detail out in Boise for four months. I managed the website and Facebook page for all fires at the Park Service. I posted every day about the different fires. Boise NIFC is a big place - they dispatch out the resources for fires all over the country, including the weather measurement machines. They divvy out who gets radios and weather stations and dispatch planes and aerial resources.

Learn more about the Booker T. Washington National Monument and how you can plan a visit at https://www.nps.gov/bowa/index.htm.