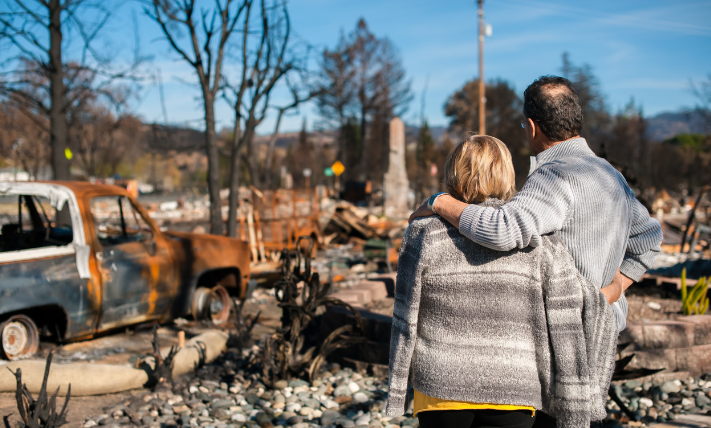 During a visit to the Federal Emergency Management Agency’s headquarters, President Biden announced an increase in the amount of money the U.S. spends helping communities prepare for extreme weather events. He also introduced a new effort, led by NASA, to collect better climate data. The former head of FEMA, Brock Long, was cautiously optimistic, stating, “We’re stuck in this unsustainable disaster-recovery cycle. We’re putting out massive amounts of money to help communities recover instead of preparing for disasters. While I applaud the increase in funding, providing $1 billion to mitigating our nation’s infrastructure is just scratching the surface.”  Read More >>>

A NEW TAKE ON THE NEW NORMAL

Earlier this month, NOAA released the latest Climate Normals for the United States. Every ten years, data about temperature, precipitation, and other standard weather measurements are updated and released for a wide variety of uses. Climate Normals have been being maintained since the 1930s,  giving insight into how our climate changes over time. Comparing the most recently released stats with those released in 2010 shows nearly everywhere in the country has warmed since the last release. Read More >>>

On a good day, up to 30% of Great Britain’s electricity can be powered by solar panels in the southwest part of the country. But, rapidly changing weather threatens the production rate from these grids, causing a need for backup sources from fossil fuels to be available at a moment’s notice. One nonprofit is hoping to curb that need through machine learning that will create better weather forecasts, reducing the country’s reliance on fossil fuels and their carbon emissions overall. Read More >>>

Humans have been harnessing wind energy for thousands of years.  However, modern wind turbines as we know them really began to take off during the renewable energy boom of the 1990s and 2000s, and the US had grown its electrical generation via wind from just 1% in 1990 to over 8% last year. Now, these turbines are becoming more efficient than ever thanks to improvements in materials and design.  Read more >>>

WeatherFlow -Tempest is excited to announce that the Tempest Weather App will soon be expanding the history view to add weekly, monthly, yearly, and all-time stats for your weather station! Tempest owners who subscribe to the Tempest Newsletter will also notice a monthly weather summary from their Tempest Weather Systems. Our development team will be launching this feature in stages, to include more parameters over time.

Ginger Zee reports the weather each day on Good Morning America. On air, GMA puts Zee's adventurous streak to good use. She has rappelled off a 278 foot Chicago hotel, paraglided in the Himalayas, and surfed with Brazilian big wave surfer Maya Gabeira. Her book, Natural Disaster, was a New York Times bestseller because of her candid storytelling style. Her next book, A Little Closer to Home: How I Found the Calm After the Storm Hardcover, out October 12, 2021, delves deeper into Zee's mental health struggles.

Q: Ginger, it's so great to meet you! Thanks for talking about the weather with us. You are such an inspiration to young people, particularly young women. As a kid, who were your role models?

A: I loved all earth sciences, but I became more focused on weather after seeing the movie Twister and connecting with Helen Hunt's character. She was a badass woman. I thought that's who I could be. Hollywood obviously takes liberties, and scientifically speaking, Twister is the worst. Everything is wrong, but it did inspire a whole generation of scientists!

Q: How do you feel about being the 'Helen Hunt' to the next generation of meteorologists? I saw a 12-year-old girl on your Instagram who loves the weather and was using a sling psychrometer.

A: I want all boys and girls to have opportunities and love to have people - especially young women - to mentor. They end up teaching me so much. I wrote a juvenile fiction trilogy about a girl named Helicity (the word means to spin). Her character is obsessed with the weather. She is the fantasy of how I wanted my world to be as a kid.

I take Helicity from a young age and teach her everything in life and weather in a couple of years. It's a shortened look back at the storms of my life. I hope at the end of the day, the books entertain while maybe teaching the reader what a derecho is!

Q: Do you teach as well?

A: I'm not teaching, but I try to do a few school talks, and it's so easy now to drop in virtually. On average, I talk to three schools a week. For the first decade of my career, that was all in person. But I've always done a lot more Zoom (before Zoom was Zoom!).

My favorite age is 3rd to 6th grade. They know how the sun and earth work. They like to speak up to go look things up, and they ask smart questions. They love knowing if it's scary to be on TV every day and are always interested in the fear factor — what was the scariest storm? Can a hurricane and tornado fight? ! It connects and grounds me, and is a big reason why I did go into TV.

Q: Can you explain?

A: I studied (BS in meteorology) at Valparaiso University. My professor said, I know you love adventure and chasing storms but you'd be good at communicating science. He said, 'Do me a favor and do an internship.'

So I interned with James Spann - a weather king in our industry in Birmingham, Alabama. The first day he brought me to a school, he was like Justin Bieber at a mall! Kids were out of their minds excited to learn science from this guy. And he told me something that never left my mind: Schools teach you to be a good communicator, but when you get that engagement from kids, they will grow up with you and start respecting the weather.

The feeling I got in that school is a big reason that I'm now communicating science to kids. After that, I started to evolve my goal to something more like if James Spann and Helen Hunt had a baby— doing storm chasing and communicating!

Q: What are some of your scariest storms?

A: The first big storm I encountered was a derecho - an epic windstorm. It was in 1998 and was a big deal because there were casualties in my hometown. In fact, the movie theater where I first saw Twister was destroyed. After that, I started watching the news in the morning before school, and while I didn't yet want to be on TV, I knew I wanted to learn about tornadoes and understand the atmosphere better than anyone else.

At Valparaiso, in 2000 or 2001, I chased my first big tornado out in the plains. There is something different about many meteorologists. We can handle extremes because that curiosity trumps risk. I remember feeling like I could touch and taste the development of the storm in the atmosphere. That feeling becomes a sixth sense, and when those indicators match the radar, there is so much excitement and adrenaline. The power of nature and the puzzle of the atmosphere will never stop amazing me.

Hurricane Katrina was the first big storm I ever covered. At the time, I was so curious: What is a 20-foot storm surge going to look like? It's easy as a young scientist to get wrapped up in data and numbers. But being in journalism, I saw bodies for the first time, and within 30 seconds, I realized it's not about the waterline, it's about people. My passion for the science evolved into compassion for humanity around weather and climate change.

Q: Climate change! How do you talk about this with kids?

A: The beauty is that this new generation is in a much better place to give science the respect it deserves. Modern medicine is often attacked now, but that's happened to climate science for the last 50 years. It was the essence of earth day in 1971 —everyone believed the same thing. Unfortunately, now, the data is even stronger.

With the kids, I talk about paleoclimatology and all about the rapid change we are seeing and the rate of change. It has never warmed at this rate and they understand things, like when you pave over something that was once grass, you automatically change the temperature and the moisture content. And that thunderstorms feed off heat and moisture. We've seen those impacts, and I show them the data.

Q: Do you have a weather station at home?

A: I do.  I don't have a radar, but if I could, I'd put one on my car. A Doppler on wheels! I like to look at my own weather, history and it provides that connection to the planet. I've noticed that many men after age 50 become weather hobbyists. I find myself a bird watcher; it's the evolution of who we are. We start to connect and open our eyes to the beauty and power of the earth.