A PERFECT RESPONSE TO A PERFECT STORM

As people everywhere continue to feel the effects of climate change and increased climate-related disasters, insurance companies are starting to look to AI as a way to step up their climate protection policies while keeping business models sustainable. With a staggering $145 billion in weather-related damages seen in the United States alone in 2021, industry experts are seeing the value of using technology and connected ecosystems to predict, respond to, minimize, and avoid climate-related damages on insured property, vehicles, and more.

A team of eleven forecasting centers predicted earlier this month a 48% chance that the globe will reach the warming threshold that international agreements are attempting to prevent within the next five years. This is an increasing trend from the 40% odds predicted just last year, and a now measly sounding 10% chance predicted a decade ago. A member from one of the centers reported that the team has been making informal predictions for the past decade, and began making formal predictions five years ago with more than 90% accuracy.

THE 1997 CHESS GAME THAT THRUST AI INTO THE SPOTLIGHT

It was a victory not many had expected at the time, but on a bright May day in New York, 1997, for the first time ever a supercomputer named Deep Blue would beat a world-renowned chess player Garry Kasparov, becoming a symbolic moment for artificial intelligence and its applications. Since Deep Blue’s victory against Kasparov, A.I. has continued to develop and now has a wider variety of applications than ever before, from voice assistants and self-driving vehicles to improved weather forecasting and disaster prevention.

Chasing storms since he was 11, Paul Stofer found time to talk shop with us from his home in Dallas. He took our Zoom call from his garage and parked his Toyota 4Runner in the background so we could see his Tempest Weather Station fixed to the roof of his truck. As if on cue, as soon as we started to talk, thunder rumbled, rain started to fall, and a severe thunderstorm watch went into effect.

Q: You have a lot of gear on that car! Tell me about your setup.

A: When I started, I had my own radar mounted to the vehicle. I did that for two years, but it started getting controversial and was interfering with some University of Oklahoma radars and research teams so I got rid of it. That’s when it was possible to get mobile broadband in the vehicle. So I could pull up real-time radar models and mesoscale discussions or satellite, surface maps for the area. And having onboard broadband internet, I’m able to feedback live video on-air as it’s happening. I’ve gotten several tornadoes on the air live. 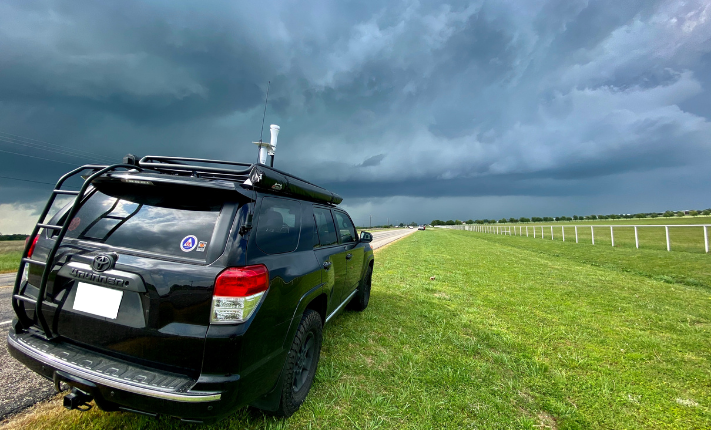 Q: What other equipment do you rely on for storm chasing?

Tempest shows the actual weather readings I’m getting. If I’m in 60 mph winds, the audience can watch my live weather station feed and watch the video from my car, with the trees blowing. It’s like you’re sitting watching as it’s happening!

Q: Technically how does this work?

A: I have a tablet I mount to the vehicle. I stream via social to a Facebook page and that’s where the station will pull from. This way, I  can stream directly to the TV station. I chase for the local Fox affiliate Fox 4 KDFW and they share to all other Fox stations in the country and now they have Fox weather and they share to that as well. I can chase locally and they can put me on the network and I often have no idea!

Q: Describe how you’ve outfitted Tempest to your vehicle and how it can survive theSE storms.

A: I have a mounting bracket bolted to the roof rack with a 1-inch pipe. The Tempest mount goes on to that pipe and that’s how I disconnect quickly when I put the car in the garage. I twist it and the weather station comes off. It’s amazing too that it’s wireless with no moving parts. The anemometer is ultrasonic and phenomenal - truly research-grade. The power connects to the 110 outlet in the car and connects wirelessly. I’ve taken that Tempest at highway speed and hail storms. The durability is impressive!

Q: How are the measurements?

A: They’re very accurate. I’ve calibrated the lightning sensor, and am able to do distance measurements to see how far lightning strikes are when they hit. For example, my Tempest will show that there's lightning 5-7 miles away and when I check the radar it shows lightning striking 6 miles away. It’s SPOT ON. The rain sensor is also spot on. Well, maybe not when I’m driving down the highway… But yes, overall it’s a very accurate system.

Q: WHEN DID YOU START CHASING?

A: I’ve been interested in severe weather since a little kid, around 11. It probably started out of fear. Fear of the unknown, lightning and thunder, or the weatherman saying a tornado is coming. That can be horrifying as a little kid and I wanted to learn more and figure out how it all worked.

The storm prediction center at the University of Oklahoma did an annual open house and my dad would drive me up to Norman, Oklahoma every year for it. When I was around 15 I met Eric Nguyen for the first time and he started to let me chase with him and then I eventually started chasing on my own. I don't advise anyone to start chasing without any education, mentorship, or help from experienced chasers. It can be very dangerous.

Q: What are some of the changes you‘ve seen since your early storm chasing days?

A: I think we’re seeing more frequency of, extreme storm chasers. More people are putting themselves in danger to get the craziest video they can. I think since Discovery Channel came on air, more people want to attempt to get that type of extreme footage. Reed Timmer is a smart guy and knows what he’s doing but other people, not as smart, are trying to imitate him.

Now, everybody has a cell phone and wants a selfie in front of a tornado. I think the days of TV stations paying big money for storm videos are starting to go away but a lot of people give their videos away just to have their name on TV.

A: It’s embarrassing but we all have moments we learn from. The scariest moment I had was back in 2003 chasing in the Texas panhandle. My two-way radio and radar had gone out and I had no idea what was going on.

I could see a large tornado coming toward me on the Interstate and I knew we needed to get out of there. I could barely see because the rain was so heavy, but I finally saw an exit and took it. We hydroplaned almost immediately and rolled the vehicle several times. When we stopped,  we were upside down hanging from our seatbelts. I crawled out and found a volunteer firefighter sitting in his truck nearby. I told him a tornado was coming and we should leave the area, but he said we had to wait for the troopers to come since it was an accident scene. As soon as he saw the baseball-sized hail falling on his truck, he agreed and we left. Unfortunately, the only place he had to take us that was safe was the county jail in Shamrock Texas. So we spent most of the night in a jail cell. That was a scary night - but I lived to tell about it!

Q: Is there a storm you won’t chase?

A: I won’t chase a storm in the dark. Nocturnal chasing is really dangerous and I tend not to do it anymore. I’m also not a fan of chasing in southeast Oklahoma or northeast Texas. There are so many trees and it’s a tough chase in terrain with trees and hills. It’s very hard to see. One year in Oklahoma, a tornado was coming through the trees, and when tree limbs were falling around my car, and that was an uneasy feeling. Anybody that does this is a risk-taker, which is fine as long as you take calculated risks. Smart decisions based on training and data will keep you safer.

Q: What’s the most rewarding part of your work?

A: I like knowing I've made a difference. Once I was chasing in Colorado and the weather service didn’t have enough information to put out a tornado warning. We were in the right spot and could see the tornado on the ground, so I typed in the NWS chat room that I was looking at a tornado. Within 30 seconds, they put out a tornado warning. Knowing we had a part of that, that feeling we could make a difference and potentially save lives is rewarding.

This is something I’ve loved doing since I was a kid. I’ve always had a passion for severe weather, nature, winter, weather, and the environment. Being able to do this for a living? I’m living a dream I’ve always had.

Check out what you can get when you combine Phillips Hue Smart Lighting, a simple IFTTT applet, and a Tempest in the backyard! When temperatures outside drop below 20 degrees, the lights turn purple. When they dip below freezing, the lights change to blue. Rain? The lights turn green! 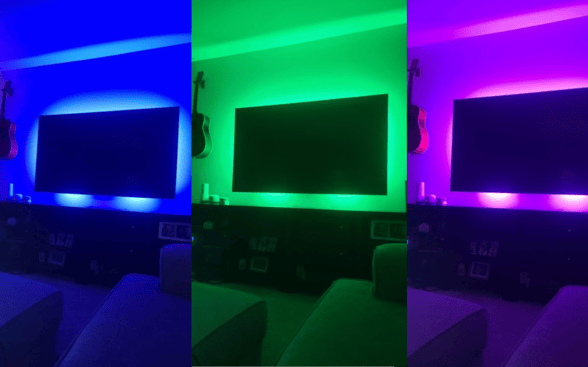 Visit the Tempest IFTTT page to check out all of the amazing applets developed for Tempest users, by Tempest users!