Today in Tempest News: An interview with Jenni L. Evans, President of the American Meteorological Society, an overview of the dam disaster in Michigan, and a look at how local governements are preparing for hurricane season in the midst of a pandemic.

Preparing for hurricane season during a pandemic

For many regions facing an active 2020 hurricane season, COVID 19 has created the potential for a double disaster. Historically, state and local governments draft plans for evacuations, transporting residents, and providing shelter for those who have nowhere else to go. In the midst of a pandemic, those plans look very different.

The lost stories of the Tuskegee weathermen

Much has been written about the Tuskegee Airmen, the U.S. military’s first black pilots who flew in Europe during World War II. Less remembered are the meteorologists who helped guide their historic run of missions: the Tuskegee Weather Detachment. At that time, flying units had to be staffed with weather officers, and because the Army was segregated, the new assembly of black aviators needed to recruit a contingent of black meteorologists.

The QUICK DEVESTATION OF A flash flooD 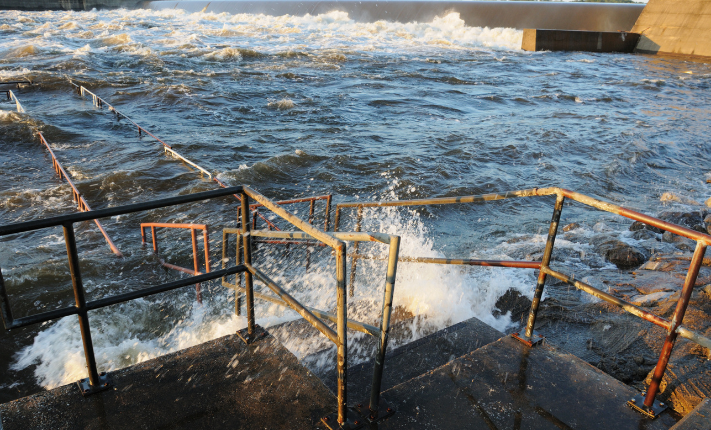 Heavy rain in Michigan recently triggered disaster with the the failure of two dams calling for the evacuation of more than 10,000 residents. With water continuing to flow, downstream towns prepare for even more devestation. Of the many weather-related disasters that occur in the United States, floods remain the leading cause of death, with most flood fatalities attributed to flash flooding.

…..with Jenni L. Evans, President of the American Meteorological Society.

Jenni L. Evans is the ultimate multi-tasker. Professor of Meteorology and Atmospheric Science at Pennsylvania State University, she also directs PSU’s Institute for CyberScience while serving as President of the American Meteorological Society. We met in Boston earlier this year at the annual AMS meeting (which also happened to be the 100th anniversary of AMS). We recently caught up via Zoom (what else?!) to rehash the celebration and talk about the weather.

Q: What was the theme of AMS this year?

A: As President of the society, I was asked to think about what we should be doing. Where should we be going? My theme was linking information to knowledge to society. I meant for AMS members in different areas— meteorology, technology, hydrology— to collaborate broadly.

Meteorologists help keep society safe and build resilience. They develop forecasting capabilities with different ways of distributing forecasts so people can use the information. Now we see more disasters with climate change and fires. Now, more than ever, meteorologists need to collaborate broadly with town planners, local government, and community groups to help society become more resilient by taking on these bigger problems that have weather at their core.

Q: Can you explain why AMS took the decision to finally acknowledge climate change and actually use the words liberally throughout the conference?

A: Yes, it was different this past meeting. There was a notable change—an intentional change—to use climate. There are so many places it’s difficult to say climate change. The AMS society should be a place where no one is afraid to say it. It was intentional that climate change be very visible because it’s critical at this point to say what’s happening

Q: Has the weather industry been remiss by not previously saying what’s happening?

A: As a community, we have so much evidence. My husband says he has said he’s watched me evolve. I have had concerns about the models and if they were good enough to do what we needed. It took me time to understand them and look at the observations and put it together. Scientists need evidence and different scientists come at things differently. I would say we, at the meeting, have come to that conclusion. Climate change is not a matter of belief, it’s a matter of observation.

Q: What do you believe was the biggest outcome of the AMS meeting this year?

A: It gratified me to see how people were looking broadly at issues during the week of presidential sessions and town halls. Specifically, looking at how government and industry can work together and the economic impacts looking at climate change. For example, taking satellite info to help the red cross to decide on action in a disaster situation. Conversations around what was going to happen when mega cities run out of water during climate change. It was real world, real time. And we seemed to come together around the need to think about what we are going to do? And how can we avoid things that will be terrible for people. A city running out of water is a huge challenge.

Q: How are you seeing governments and the business of weather working together?

A: Weather is now a collaboration between business, academia and government. Both see climate change as an opportunity to work together—
we’re working at cross purposes if we don’t work together. Already, you can look at opportunities – meteorologists have been involved in helping the alternative energy sector think about how they can thrive; where should wind be? Offshore? Onshore? How can we distribute those so they are economically viable and getting the best result from installing that infrastructure. This is about making new opportunities with climate change as the backdrop. And this is fundamentally what’s changed: the weather industry is giving us, in academia and government, actionable information, There is a huge opportunity in communicating about this to consumers.

Q: Can you give me an example?

A: Sure. Looking at wildfires as an example. What does a resilient community look like? Do we tell people not to live there? It’s more powerful when we work on this together and come at the problem with different perspectives, in case we missed something and need to revisit the way we’re looking at it. Everyone individually doesn’t have the one right answer.