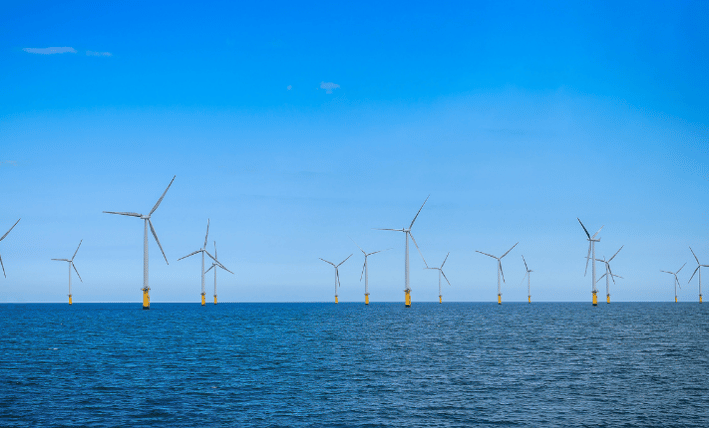 The Biden Administration takes a big step towards its goal of reaching 100% carbon-free electricity by 2035 with a deal that will allow offshore wind farming in waters off the coasts of California. An agreement with the Department of Defense was made to allow an almost 400-square-mile area to be used to float wind turbines that could have the ability to produce 4.6 gigawatts of energy. Read More >>>

The Atlantic Hurricane season officially began on June 1st, and the National Oceanic and Atmospheric Administration is predicting higher than normal activity for the season. While not expected to be as busy as the 2020 season, between 13 and 20 named storms have been predicted for the year, with three to five expected to become major hurricanes. Read More >>>

As a child, Ross Forsyth remembers his father collecting and storing weather instruments and artifacts in hopes of one day founding a weather museum.  Today, he serves as Co-Executive Director of that Museum. Check out our interview with Ross to learn more about what kinds of exhibits the museum offers, and how to get the kids in your life interested in the weather. Read More >>>

Silvia Benedito's wholly original take on architecture focuses on the role of the atmosphere - the sensory space where meteorology and weather exist within the built environment. Her new book, Atmosphere Anatomies: On Design, Weather, and Sensation, examines how weather is intrinsic to spatial design - and has a dramatic sensory effect on the people who use the space. Tempest tracked her down at her home near Munich, Germany so we could learn more and follow her down this delightful rabbit hole.

Q: Everyone who loves weather has to read this book. How did you get into this topic?

A: I'm an architect, formally, but I operate between landscape architecture and structural architecture. I have been entrenched in landscape for the last 15 years and was involved in the High Line in New York City, among many other projects.

The book's main idea is that once you see weather through a spatial lens, you have to merge these two disciplines of architecture. My main argument is that operating just as architecture doesn't help us think about climatic amelioration.

Q: How are the atmosphere and weather considered as a space? Can you explain that?

A: There is a space in architecture that we call 'above the threshold.' The threshold is the area between private and public, between inside and outside. Between individual and collective. It's this threshold that I study in many of these projects.

The threshold becomes a space, and this is relevant in French architect Le Corbusier's idea for the Chandigarh Capital Complex in India— where the space of transition becomes a meaningful space in and of itself. And he sculpted that in very thermally sensitive ways. Corbusier wanted to alleviate the climatic extremes of India, at one point stating that the big challenge was to address the problem of breathing. He goes back to the body; the heat and humidity make it difficult to breathe, so he uses a beautiful, tangible metaphor for this thermal threshold.

A: When Corbusier started Chandigarh, he was working in the tropics in Africa. Chandigarh's budgets were low, and they could not afford air conditioning, forcing them to find inventive ways to tackle the climate challenges. In places with hot, tropical climates, the two priorities were: 1) To reduce direct solar radiation, and 2) If it heats directly, the priority is ventilation. It is still one of the most complex principles to model, but the most effective still, other than AC, to reduce heat.

That's why it is so frustrating to see architects cut down trees and install glass. Sometimes we need to be pragmatic with design, taking things like heating and cooling bills into account. That goes back to the weather as a thing. Weather is very scientific and data-driven but also, experiential.

Q: how do you design for human comfort?

A: If you think of the atmosphere as thermal contrast - contrasting thermal conditions can provoke stimulating experiences that can be memorable. Imagine spending a hot day at the beach, then stopping at a café to enjoy a beer. It's cold, and your body is hot. You receive this breeze coming from the sea, it's heaven. These experiences move us, transporting us to where beauty and relief are the same.

We work on many types of these projects at my design practice, OFFICINA. We were finalists for a project for the MOMA pavilion at PS1 in Queens. I wanted to create a pavilion in the garden for climatic amelioration and delight, one that communicated with all the senses.

This project came from the question: how to transform solar energy onto ice. There is a wonderful precedent in Persia, Iran where they have ice houses in the desert. They do this with thermodynamic phenomena.

At night, it gets really cold. They get a thin surface of water on a wall oriented to the north. Radiative cooling from the sky will form very thin layers of ice during the night. In the early morning, the owner scrapes and collects the ice in a vault. The vault is very cold, made of adobe, which keeps the temperature cool.

The idea was to bring this to Queens, where there is lots of solar radiation and humidity. We found a climatic engineer in Stuttgart who did a small model in a laboratory and it worked! I really wanted to do this, but alas, we didn't win!

A: I'm taking the next transformation of the book onto a new path: wildfires. In recent years we've seen increasingly devastating wildfires. I believe 2017 was the first time the word mega-fire appeared, with fires that year reaching scales and temperatures never seen before.

I'm focusing on traditional communities closer to Mediterranean landscapes. I'm trying to bring more attention to revitalizing specific landscape techniques and management processes, including the reintegration of cultural burnings and herbivores in the landscape. These two actions will help reproduce the landscape discontinuity and the reduction of the understory.

The wildfire project is a project of awareness. The next few decades will see a revolution in landscape management. We did a pilot project three years ago looking at landscape terraces that have protected a village from the fires by creating infrastructures that help retain water and humidity that helped to stop the fire. So basically, I'm looking into traditional infrastructures and reconceiving them for a future where they will take on even greater importance.