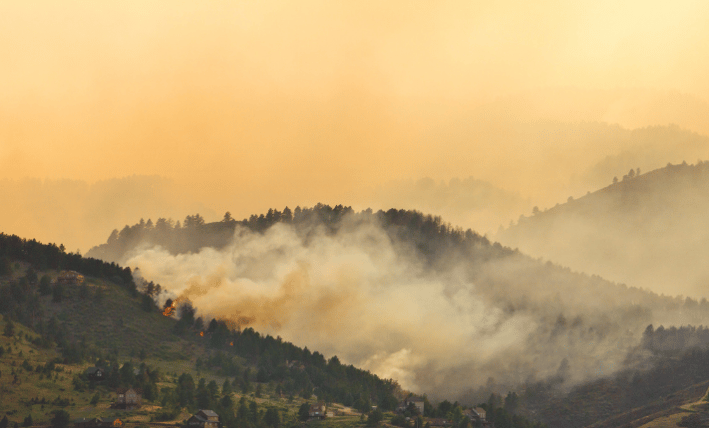 POTENTIAL FOR WILDFIRES RISE in MUCH OF u.s.

Wildfires are ramping up early this season, with more than 30,000 fires consuming over 1.5 million acres across the United States already. The unusually intense level of activity this early in the season has pushed the National Interagency Fire Center to raise the nation's preparedness level.
Read More >>>

Was it a black swan event or a canary in a coal mine? President of RiskFootprint Albert Slap speaks on the tragic collapse of the Champlain Towers South Condo and how climate change in already harsh coastal environments should be a wake-up call to those in high-risk areas.
Read More >>>

MANY STRUCTURES in the U.S. ARE IN NATURAL DISASTER HOTSPOTS

A new study exploring the impacts of natural hazards like tornadoes, earthquakes, floods, or wildfires reports that 57% of structures in the contiguous US are situated in “natural disaster hotspots,” areas mapped by the team where the probability of a natural hazard event was within the top 10%.  Read More >>>

Tempest Weather System owners who subscribe to the Tempest Newsletter email have likely noticed a new feature. We are adding weather data from your Tempest into the newsletter, including high/low temps and precipitation totals for the previous month. If you have a Tempest that has been up and running for at least 1 month but you do not see this feature in your email newsletter, please contact us!

When Emmy-winning, storm-chasing photographer Mike Olbinski is not watching his favorite team, the Phoenix Suns, you can find him roaming the Central Plains, chasing storms and his next photo opportunity. His time-lapse films and photographs are truly epic, and his work has appeared everywhere, from ads for Allstate, Audi, and BMW, to Lamborghini commercials and even Thor 2!

Olbinski's chasing season runs May through July, and for the rest of the year, he photographs weddings. We meet him on zoom after he had just returned from chasing with his kids in Nebraska.

Q: I see a lot of Marvel action figures behind you on the shelf. Is that an Emmy next to Ironman?

A: Yeah, that is the Emmy I won for my work with Channel 3, a local station. They do a monsoon special every year and asked for all of my footage. We won the Rocky Mountain Emmy, and Jim Cantore ( a legend!) did a video announcing the two stations that won. That part was really cool. I've never been more proud of what I do than when I got to know Jim Cantore.

Q: How did you get into storm chasing and wedding photography?

A: I never knew storm chasing was a thing until 11 or 12 years ago when I stumbled upon the show Storm Chasers on the Discovery Channel. I thought, 'OMG! People do this?' I've been fascinated with lightning since I was a little kid and a bolt struck near our house. It was so bright- it was mind-blowing. From there, I found out that people chase these things, and I started going further and further. I started chasing more seriously in 2015 and began doing workshops and tours.

I got into photography at the same time. I would spend hours on Wunderground looking at people's lightning photos. Then, one night, I went out on the street to wait for a storm. I had a crappy point-and-shoot camera, but I actually got a good shot. I came home and told my wife that I needed a DSLR camera. So we sold a ton of box sets of DVDs on eBay and used the funds to buy a camera.

Q: How does your wife feel about the storm chasing?

A: Gina (my wife) is totally on board. She's the greatest. She gave me one of my best lines! I had to speak at a big industry event and was pretty nervous. She told me to lead with, "I have to confession. My name is Mike, and I love big kaboobs" (what we call dust storms). The whole room burst out laughing, and I used that line for the next five years!

I love to be home and chill with my family, so in many ways, storm chasing is the opposite of who I am. I recently took the kids chasing with me to get them out of my wife's hair. We flew to Denver, chased in Nebraska for two days, and it was an adventure. I love taking them with me. For the most part, they are safer with me because I understand the situation. I would never put them in danger. And they enjoy it. They like to be on the road and eat junk food, and we got a lifetime of memories. 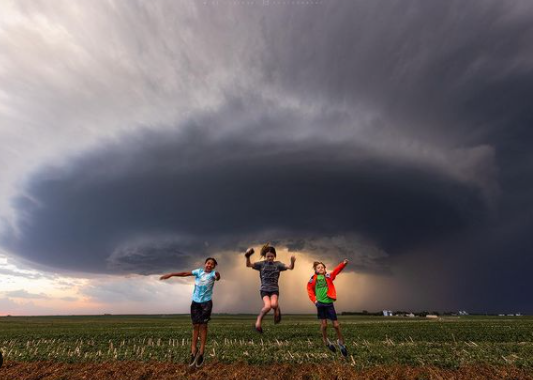 Q: How does a person learn to chase? Is there some storm chasing school out there?

A: Nobody really taught me. I learned on my own and through friends. A lot of people share information, but ultimately you learn by doing. The first couple of times I went out with a friend who knows a lot about meteorology and was able to help a lot. But over the years I got more experience by being out there.

Q: What equipment do you use?

A: I have a weather station at my house for fun. But not on my vehicle. I have a dashcam, but I'm so focused on time-lapse with my cameras that I shoot with 2 or 3 at a time — two are time lapsing. I had a drone at one point, but I can't manage all that. Also, my iPhone 12 shoots such good quality in wide-angle mode, you can almost see the whole supercell, where it was impossible before.

A: I do get scared if a storm is very close. I'll get in the car. I probably should have been hit one time I was on a dry lake bed. I drove onto it for a mile. The storm was in all directions around me, and I was the highest thing. The storm built up over my head and dropped a lightning bolt. Then another bolt hit 40-50 feet behind me. I thought: 'What am I doing? I have three tripods on my truck on a flat lake bed?!' So I huddled up in the back of the truck and let my cameras do the work. I got two spectacular bolts on camera. Plus, I got the top of the lightning bolt that was over my head. That was really creepy, though. It could've been my last shot. That thought still freaks me out.

Q: But isn't what you do harder than just chasing storms because you are also capturing such dramatic photographs of the storms?

A: I'm not a meteorologist or scientist. I know what conditions I want to chase in and I have certain limits. I'm generally further away from rain and hail. I don't put myself in those potentially more dangerous situations. I prioritize the photos, time-lapse, and art. That's what I love. My skill comes in knowing where to position and plan for the best shots and find great foregrounds. That's where I excel.

Q: Where is your favorite place to chase?

A: I like chasing in Colorado and Kansas because they are flat, open, and green with gridded roads. Other areas like Oklahoma can get hilly and I like flat foregrounds when I'm chasing storms. I don't want trees in my way because I want to see where the lightning lands. A lot of my footage gets used in nature shows, music videos, and movies. If I have a tree in the middle of the shot, it might be unusable. So, for the most part, I strive for clean foregrounds and horizons.

Q: how do all these shows and videos find your footage?

A: I'm represented by a curated stock footage agency website, Film Supply. Me and Dustin Farrell, who does slow-motion lightning, are the only people on Film Supply with storm footage. It's high-quality stuff, and they license my work to everybody.

Pearl Jam found me through film supply and took a bunch of photos of Arizona lightning. The cool thing is that they used one of my shots
in a promo where they were all on stage, it was pitch dark and all you could see was my lightning behind them.

Q: Would you say that moment or being in the SECOND Thor film was a career highlight?

A: People know me mainly for the time-lapses in the Thor movie. I love having an Emmy, but I still think Thor is the coolest because I love superheroes and Marvel and comics. Other than Lord of the Rings, Marvel is the greatest movie franchise ever. And to have footage as part of that history of the Marvel Universe is incredible. I wish it would've been a better movie - if it was Thor Ragnarock…..I would be going nuts!! Kidding:)