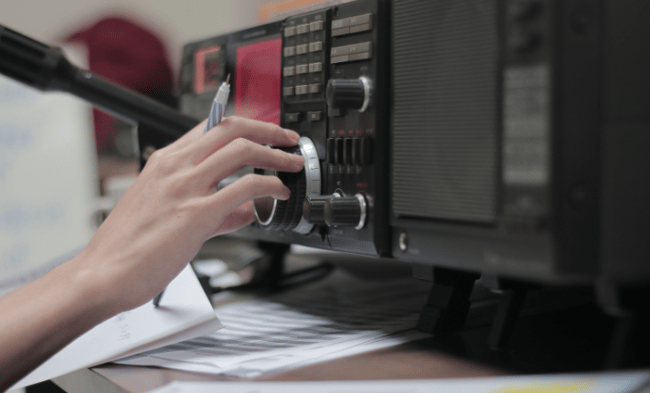 Dating all the way back to 1901 in its creation, ham radio is used today by millions of people to communicate world-wide. To kick off 2023, we sat down with Tempest Ambassador and ham radio expert Eric Hofer (KJ4YZI). Eric is the figure behind hamradioconcepts, a popular YouTube channel that shares tips and insights about operating ham radio. We talk with Eric about how he got interested in ham radio, some of his favorite communications, and the role that weather plays in ham radio.

Q: FIRST OFF, CAN YOU EXPLAIN WHAT HAM RADIO IS AND HOW IT WORKS?

A: Ham radio is all about embracing the art of radio, increasing our knowledge of radio communications and the theory of RF. We do it as a hobby, but it's also a service in emergency form for various companies, countries, and organizations. Ham radio can consist of people talking amongst themselves from county to county,  state to state, or across the world, using radios and antennas you can build or buy. This even extends to space communications from satellites bouncing signals off the surface of the Moon and back to Earth. Ham radio is very popular today. In the 60 + years that people have been doing this, it's just growing exponentially. It's a lifelong, addicting hobby. And it's never boring. Every day is there is a new thing to learn about radio communications and the art of it. And when all else fails, ham radio is the last mode of communication when everything else is offline.

Q: HOW DID YOU GET INTERESTED IN HAM RADIO?

A: My 10th birthday present was a CB radio. I like to call CB radio the gateway drug to ham radio. It's a license-free, very informal form of radio communication. CB radio frequencies used to be in the ham spectrum until they designated that for citizens that don't have a ham license that just want a mode of communication. So now CB radio has its own place. By the time I was about 17 or 18, I met my "Elmer," Pat, and he got me into ham radio. (An Elmer is a term for someone who gets you started in ham radio, sits with you, and teaches you the basics and beyond.) I was initially introduced to him over the CB, but when we met him in person, he turned his radio on and pushed a button, and the radio started talking to me. People were talking from all over the world. I said, "Oh my gosh, I have to do that." Once I jumped in and got a ham radio license and started realizing what was out there, it turned into a never-ending quest of what can I do next in ham radio.

Q: WHAT ARE THE MOST COMMON REASONS PEOPLE BECOME INVOLVED IN IT?

A: It's funny, if you had asked me this question 10 years ago, I would probably have a different answer. There are several categories of people that get into ham radio. Some are for emergency disaster preparedness, some are preppers. Some just want to be able to communicate when everything else fails, and others want to use it as a form of social media. Ham radio was social media before social media even existed. If you wanted to talk to your friends, or relatives across the world, that's how you did it, and it was a daily thing for some people.

There are a lot of people who avoid social media because it is screened or used for analytics, etc. But the fact is that you can't trust social media, cell phones, or any kind of app to be there when the grid goes down, or if there’s some sort of mass disruption, or let's say, even if you're camping way up in the mountains of Canada, where there's no cell phone service.

Q: I SAW AN INTERESTING VIDEO YOU POSTED ON YOUR YOUTUBE CHANNEL ABOUT YOUR MOST MEMORABLE HAM RADIO CONTACT. CAN YOU TELL US ABOUT THAT?

A: The first contact is always one you remember. I made a video and asked, “What is your best contact? The one you most remember?” I had a couple, and one was when half of my antenna was in the ground. I was talking to somebody across the world with half an antenna, and I didn't realize it. You know, somebody may have made their first contact with an antenna they made with a bicycle rim! I've talked with people across the world using a tape measurer on a bicycle rim on a shopping cart. I've made antennas out of so many things. And I remember those contacts. Some people commented that their most memorable contact was talking to a sibling 50 miles away when people said they couldn't do it. And that will always stay in you when you know, it's more than just a phone call. It means something more when your signal is leaving an antenna and arriving at somebody else's antenna and exchanging information back and forth.

A: One thing that I mentioned is that ham radio is often used for emergency communications and emergency disaster relief. An example is something called Skywarn. Skywarn comprises certified weather spotters, from storm chasers (most of whom use ham radio in case a tornado takes out critical infrastructure) and meteorologists, to civilians that want to help. An active Skywarn spotter may be contacted by the local National Weather Service office to be the eyes on the ground, providing more information. Because sometimes, the radar just can't pick up a weather event if it's too close to the radar, or if it's too low elevation. So when the weather service calls you to ask for the local conditions in your area, they don't mean, "Go online and look at the weather in your city, which may be at an airport." They expect conditions right there in your immediate vicinity. This is why I always have a weather station in my backyard, because down the street, they may have never seen a straight line wind or microburst or anything, but three houses down, half my roof is gone.

Also, for some reason, in ham radio, the first part of the conversation is always about the weather. I could be talking to a contact in Denmark or Australia, and they usually say, "Nice to meet you, my name is Bill, and I am located here, and the current conditions are this and that."  And that's just more if an interesting exchange of information.

With ham radio, you have antennas in the air, structures in the air and cables that come into your house, and things that can get broken and cause severe damage or death. For instance, my Tempest has great lightning detection and alerts. I know people that have experienced lightning strikes over and over again on their antennas, destroying radio gear or even causing fires. If I'm not paying attention to the radar, and storms are coming, I can know when it pops up within 30 miles or less where that is coming from via Tempest. That's my reminder that I better switch my equipment off because the last place I want to be in that situation is on a radio with a microphone in my hand when lightning could strike my antenna and injure or kill me. So between weather monitoring and emergency services, or a casual conversation starter, I think the weather is always in every ham radio operator's mind.

Q: WHAT IS THE MOST BASIC SETUP BEGINNERS NEED TO GET STARTED IN HAM RADIO? DO ALL HAM RADIO OPERATORS NEED A LICENSE?

A: Yes, you have to have your license. And that requires taking a formal test in front of multiple volunteer examiners for the FCC to grant your license. It does take a little bit of studying, and there are various ways to study to get your license. Once you get your license, I recommend going a very inexpensive route. There are handheld and mobile radios on Amazon that are $25 to $75 that will cover several bands, and you can get on the air with a very simple radio that is easy to operate. It may not be the best quality compared to the higher-end ones, but it only takes that much just to get started. And from there, the rest is history because there are very expensive radios that do a lot more, like send pictures and GPS coordinates and text messages. But in the meantime, a simple BaoFeng UV radio is great for most beginners. There are tons of different variants and price points. You can get started with a handheld and get your feet in the water in ham radio and then progress as you learn.

Stay in touch with Eric and learn more about ham radio:

The onslaught of atmospheric rivers in the past few weeks has caused widespread flooding and killed at least 19 people. While the deluge raises hopes of drought relief, California looks forward to drier weather ahead.

EXTREME WEATHER IS SHAPING LAW NOW MORE THAN EVER

As the world saw more extreme events in 2022, we also saw the beginnings of how extreme weather and our warming climate can shape diplomacy on an international scale. After years of pushing for loss and damage funds from developed countries, for the first time last year at COP27 a deal was finally struck to assist developing nations with climate damage they cannot adapt to.

A new study by the Potsdam Institute for Climate Impact Research focuses on the growing hurricane intensity expected by our warming climate, and subsequent damage to economic growth that could be experienced in the United States and beyond due to the more extreme hurricane seasons. Researchers on the project also assess the effectiveness and limitations of insurance as an adaptation strategy to proposed losses, finding that the current climate risk insurance strategies are an insufficient match.

The continued growth of regenerative gardening, climate-resilient gardening, high-tech gardening, and thriving houseplants are all on the predictions for 2023 recently released by the Royal Horticultural Society. How do you plan to upgrade your garden in 2023?