Air Quality 101: From the CAA to the AQI 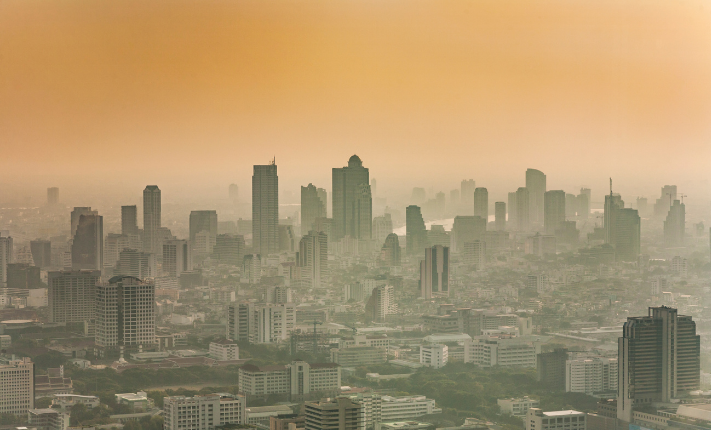 Air quality has been measured and reported by the Environmental Protection Agency since 1976 using the Air Quality Index. The AQI provides vital information to the public about air quality conditions, but what is it exactly, and why did we start to monitor air quality in the first place?

When the week of October 24th, 1948, in bustling Donora, Pa. began, very few residents paid attention to the thick and heavy fog that had enveloped the town. Donora had been experiencing the dense emissions from the nearby zinc plant and steel mill for years, but what they didn’t expect this time was that over the next three days more than 20 people would die, with hundreds left sick and thousands impacted. Physicians worked around the clock, a temporary hospital and morgue were built in the community center, and firemen felt their way through the blindingly dark and toxic air going door to door in attempts to aid as many as possible. The smog continued to hang over Donora for an entire week before rains finally washed away the deadly air on October 31st.

The Donora smog was just one of several public health crises that occurred across America that got scientists researching the relationship between air pollution and our health. Legislation followed suit as information about the hazards of air pollution became more well known, and in 1970 Congress passed the Clean Air Act (CAA), which allowed for the establishment and development of the country’s air quality standards as we know them today. The Environmental Protection Agency was soon created in December of 1970 to uphold the standards set by the previously passed CAA.

It was later found out that the deadly smog that Donora had experienced was a mixture of sulfuric acid, nitrogen dioxide, fluorine, and other poisonous gases that were emitted from nearby zinc and steel mills. A combination of these gases and higher than usual temperatures caused the pollutants to become trapped in the valley that Donora sat in, continuing to build until the rains finally washed them away a week after their arrival. Human-made air pollution like the fumes exhausted from industrial plants, automobiles, and other types of human activity is a large source of any poor air quality experienced today. Natural factors can contribute to poor air quality as well, like dust and other particles entering the air due to volcanic eruptions, dust storms, or other natural disasters. Everyday weather patterns can also affect air quality, like in the example of the Donora smog and reports of higher than normal temperatures. Not only can factors like temperature and sunlight affect the chemicals in our air that in turn impact our air quality, but the wind is also a large factor in where toxic gases move throughout our atmosphere.

AQI is an index first developed by the EPA in the 1960s that gives information to the public about air quality. The index ranges from 0 to 500, with lower values meaning better air quality, and high values meaning worse air quality. Any value at or below 100 is deemed as satisfactory, with conditions getting increasingly dangerous as values rise. The index is broken up into six categories ranging from Good to Hazardous, with each category affecting a larger portion of the general population.

While our atmosphere is largely composed of nitrogen and oxygen, there are also other gases and smaller particles present that can contribute to air quality. Some of these other major pollutants are monitored and reported by the AQI, including carbon monoxide, sulfur dioxide, nitrogen oxide, particulate matter, and ground-level ozone.

Information about these pollutants is monitored by a combination of tools on the ground and satellites that collect data about our air. Satellites monitor particulate matter like smoke from wildfires, pollution from cities and factories, volcano eruptions, and more. They are also able to measure other poor air quality contributors like ground-level ozone and carbon monoxide. Additionally, one satellite system can track aerosol movement across the globe as it moves with the wind.

Where to find your AQI level

The first air quality index was published in 1976 and has gone through several updates over the years in order to stay up to date with the latest air quality standards. Urban areas with a population of 350,000 or more are required to report the AQI on a daily basis, and many areas report it as a public service. The easiest way to find the AQI for your area is by using https://www.airnow.gov/ where you can get information about your current and past air quality, the primary pollutant in your area, air quality alerts, and more.