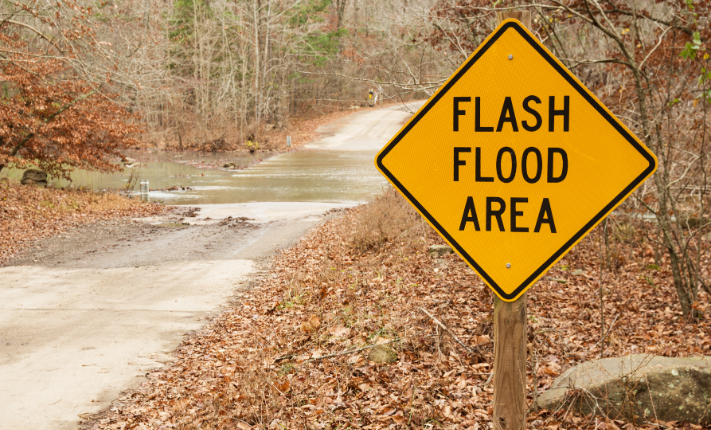 Of the many weather-related disasters that occur in the United States, floods remain the leading cause of death, with most flood fatalities attributed to flash flooding. The number of flash floods in the United States peaks from late spring through summer, when melting snow, warmer temperatures, humid air, and frequent thunderstorms are common.

According to NOAA's Weather Prediction Center (WPC), daily flood reports from 2007 to 2017 noted that 75% of all flash floods in the U.S occurred from late-April to mid-September and 34%of those occurred in between June and August. While this coincides with flood season in general, a key difference between typical flooding and a flash flood, is simply time. Flooding may last days or weeks, while a flash flood occurs very quickly, usually under six hours.

Here is everything you need to know during this year's flood season to expand your knowledge and prepare you and your family for flash floods.

What Causes a Flash Flood

Flash floods are caused by rapid, heavy rainfall on an area that exceeds the amount of water the ground is able to absorb, flooding dry creeks and streams, or collecting enough water to overflow a body of water, causing water levels to become unmanageable. Depending on the severity of the flood, the water can travel 6 to 12 miles in a single hour from the area of origin. This combination of speed and power makes flash floods sudden and dangerous, sometimes leaving mere minutes for the alarms to sound. In areas where the soil is hard packed and dry, flood waters can quickly build into 10-20 feet walls of water and debris, and though it may be hard to imagine, the 6-inch creek in your local state park can swell up to a raging 10-foot flood within an hour.

Where Do Flash Floods Occur

Flash floods occur everywhere. Every one of the 50 states in the United States and many places around the world can be at risk of flash flooding, including urban areas as well as rural, coastal regions, deserts, mountains and forests; if it rains, it can flood. Zion National Park in Utah is infamous for flash flooding, with much of its sedimentary landscape unable to absorb water. Dry canyons have been known to become raging rivers in less than an hour of rain, an occurrence that is well documented and has led to tragedy many times when hikers are caught unaware.

Densely populated areas are also at a high risk for flash flooding because the constructed buildings, highways, driveways, and parking lots reduce the amount of ground capable of absorbing the water, increasing flash-flood potential by increasing run-off. Areas near rivers or waterways are also at great risk due to the presence of levees and dams, which have the potential to crack or break for a number of reasons. An infamous example of this was the failure of the levees and the flooding of New Orleans during Hurricane Katrina in 2005. Throughout the area, more than 50 levees and floodwalls failed or were breached in different locations. 80% of the city was flooded to a depth of more than ten feet in some neighborhoods.

How to Stay Safe in a Flash Flood

Flash floods are the most dangerous weather disaster in the US and one of the deadliest in the world. On average in the US the number of deaths caused by flash-flooding each year is 104. Staying safe during a flash flood has just as much to do with preparation as it does reaction. Because of its rapid and destructive nature, flash floods can come with little to no warning, and your survival relies on the choices you make ahead of time as well as the minutes between the warning and the impact. Here are some tips to stay safe during flash flood season:

The first step to becoming weather-ready is to understand the type of hazardous weather that can affect where you live and work, and how the weather could impact you and your family. Preparedness is critical to preventing a potentially unsafe situation, and real-time weather information and alerts can inform your decisions in an emergency.

Understanding the Weather Around You

People use weather conditions and forecasts to determine many aspects of their day. What they will wear, what activities they can do outdoors, and what mode of transportation they will take. Checking the weather each day is second nature to most people, but that habit takes on a more urgent tone when it comes to dangerous weather. Understanding the geography of your area and how and when the weather will affect it is vital to protecting your property and ensuring health and safety. When heavy rains are predicted, stay informed by regularly checking the weather, monitoring your home weather system, and heeding advisories. The more you understand your local weather and what specific weather conditions mean, the better prepared you will be to handle emergency situations with a level head.