Today in Tempest News: Meteorologist and hurricane specialist Bryan Norcross talks about the scariest hurricane moment he's ever had, evacuating during a pandemic, and the danger of assuming anyone knows how a hurricane will behave.  Plus a look at the raging wildfires in the West and Hurricane Laura's path of destruction.

One of the most powerful storms to strike the Gulf Coast in decades, Hurricane Laura made landfall near 1 am this morning. The National Hurricane Center expects catastrophic damage, flooding, and widespread power outages. Read more >>>

A massive dry lightning storm in California generated 11,000+ strikes in a matter of days, igniting a rash of wildfires that have burned over one million acres with no end in sight. Smoke from these fires and a number of other fires bruning accross the western US have combined, signifigantly worsening air quality. Read More >>>

Bryan Norcross is well known for his fact-based, no-nonsense hurricane reporting. He has analyzed hurricanes for a number of news outlets, including CBS News, The Weather Channel, and WFOR in Miami. Bryan became a beloved figure in national news after his empathetic and in-depth coverage of Hurricane Andrew in 1992.

We sat down with him to talk about his scariest hurricane moment, hurricane forecasting, and why hurricanes seem to be getting more severe. 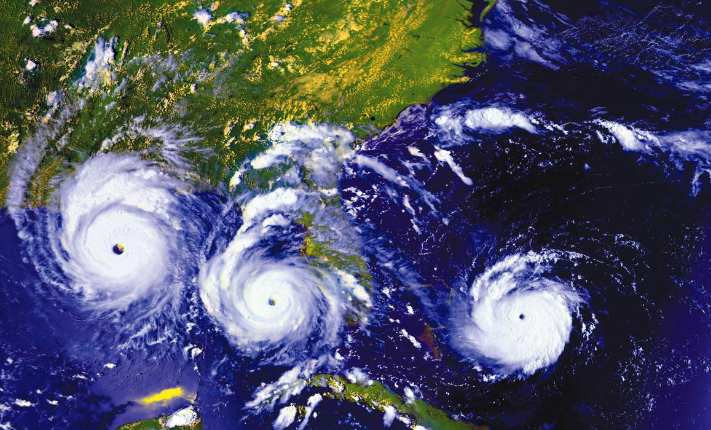 [A timelapse shows Hurricane Andrew from right to left on August 23, 24, and 25, 1992. One weather station at a private home clocked winds blowing up to 177 mph. Courtesy of NASA.]

Q: Scientists are predicting this could be the most active season on record. Do more hurricanes also mean hurricanes are getting worse?

A: Climate scientists are measuring a slight increase in the intensity of powerful storms, and measuring more rainfall — so the storms are more likely to produce floods. The effect of intensity change is small compared to the effect of the development of the coastline. We've hyper-developed the coastline, putting so many people in harm's way, a problem that has gotten progressively worse.

Storms are in single-digit percent stronger on average, so yes, storms are detectably stranger. But with hundreds of thousands of people moving here and living in high rises on the coast, that's the more significant public safety issue that we don't have a way to handle properly.

The other issue is with climate. Namely, the sea level is rising - that's a fact. And that makes hurricanes worse now than in the past. When you are starting with higher water already, flooding is much more likely. We are spectacularly more vulnerable now, so when storms do come, they do more damage.

Q: Is it getting easier (or more accurate?) to predict big storms?

A:Hurricane forecasts are better now, the best they've ever been. But that's mainly because we have more computing power behind them. Better forecasts are directly related to computer power and getting more data. WeatherFlow is one of those invaluable sources of surface weather data, especially since we're getting less data from airplanes during COVID.

Forecasts are never going to be perfect. We will always be predicting extreme events with a certain level of uncertainty. It's the nature of the atmosphere—it's fundamentally unpredictable.

Q:What do you advise people to do? Move?

A:Everybody needs a plan, which is even harder in these COVID days. There are three ways to evacuate: Getting out of town ought to be doable, but with fewer airplanes flying, it will be a challenge if you want to leave by air. Other people drive and go to hotels, but most people would typically stay with friends in a safer location. Given the desire to remain socially distant, many people are reluctant to stay with extended family or friends. It's important that you answer the big questions: Where will you and your family ride out a storm? How will you protect your property? How will you have enough water to drink and wash and flush the toilet? And who is your family's point of contact out of town? A little effort now will save you a lot of grief after a storm.

Q:Last question: what was the scariest hurricane moment you ever had?

A: By far the scariest was Hurricane Andrew. I knew that people were dying in Dade County that night; there was no question. That was a terrifying experience for myself and my city. The concern I felt shaped my reporting, and I was intentionally very clear about what was happening so the community could prepare, or at the very least, anticipate. I offered suggestions to help citizens stay safe, and I am happy that so many people were able to do just that. To this day, people say, 'You saved my life. You said to get under a mattress, and after I did, the winds brought down my bedroom wall.'

Nobody knows what's going to happen when a hurricane approaches. Every hurricane is different. The four strongest hurricanes ever to hit the U.S. in the 20th century were all tropical storms just three days before impact. Sometimes we'll see a Category 1 that wreaks havoc; other times, we'll get a Category 3 that fizzles out. You have to treat every hurricane as if it has a unique personality.

With a hurricane, never assume, "Oh this one is going to be just like that last." By nature, they end up being different. Every single one is different.